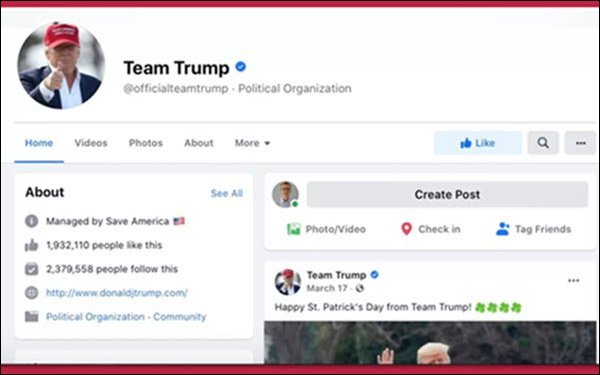 Meta has announced that it will end its two-year suspension of Donald Trump’s Facebook and Instagram accounts, but claims that it has put “new guardrails” in place to deter Trump from engaging in the offenses that resulted in the suspension.

Facebook and YouTube suspended Trump after the January 6 insurrection at the U.S. Capitol, citing violations of their guidelines and concerns about his potential for inciting further violence.

Twitter outright banned Trump, but new owner/CEO Elon Musk recently reinstated him. Trump has not yet begun to post again on Twitter, but according to media reports, he intends to do so soon, and perhaps end or limit his relationship with his own social site, Truth Social — which has attracted far fewer followers than his Twitter account.

Meta’s decision means, among other things, that Trump, who has declared his candidacy to run again for president, will be able to run ads on the pages of his Facebook and Instagram pages, which have about 34 million and 23 million followers, respectively.

Trump used Facebook heavily to build lists and fundraise for his past campaigns — and political groups associated with him skirted the rules and continued to run ads on Facebook after his suspension (above).

Political pundits are already predicting that Meta's decision could help impact the outcome of the 2024 election in Trump's favor.

A spokesperson for the Real Facebook Oversight Board — a group of social media experts, including former Meta executives, formed to monitor and try to influence Meta's impacts on society toward the positive — issued a statement describing Meta’s decision as a “calamitously irresponsible” one that “will only serve to spread the Big Lie and drive hate and disinformation.”

Meta “has given up on their Oversight Board, given in to political pressure and grossly underestimated the danger of allowing someone who has only used escalating language on his own social network," the watchdog group added. "This may drive engagement and profit for Meta, but it will also drive Meta's audience further apart, and democracy closer to the brink.”

In a blog post, Nick Clegg, president, global affairs for Meta, asserted that Meta’s decision is “rooted in the belief that open debate and the free flow of ideas are important values, especially at a time when they are under threat in many places around the world. As a general rule, we don’t want to get in the way of open, public and democratic debate on Meta’s platforms — especially in the context of elections in democratic societies like the United States. The public should be able to hear what their politicians are saying — the good, the bad and the ugly — so that they can make informed choices at the ballot box. But that does not mean there are no limits to what people can say on our platform. When there is a clear risk of real-world harm — a deliberately high bar for Meta to intervene in public discourse — we act.”

Clegg alluded to the official Facebook Oversight Board’s having initially concurred with its decision to suspend Trump but also having criticized the originally indefinite nature of the term of the suspension, which led to the company then specifying a two-year suspension. The company also promised to “assess whether the risk to public safety has receded” before deciding whether to reinstate Trump’s accounts.

Clegg said that Meta had not spoken with Trump or his associates before making its decision. But he also offered no indication that executives had consulted further with its Oversight Board prior to issuing its decision.

“To assess whether the serious risk to public safety that existed in January 2021 has sufficiently receded, we have evaluated the current environment according to our Crisis Policy Protocol, which included looking at the conduct of the US 2022 midterm elections, and expert assessments on the current security environment,” Clegg wrote in explaining Wednesday’s decision. “Our determination is that the risk has sufficiently receded, and that we should therefore adhere to the two-year timeline we set out. As such, we will be reinstating Mr. Trump’s Facebook and Instagram accounts in the coming weeks. However, we are doing so with new guardrails in place to deter repeat offenses."

As for the increased "guardrails," Clegg wrote that in addition to being subject to Meta's Community Standards, "in light of his violations, [Trump] now also faces heightened penalties for repeat offenses — penalties which will apply to other public figures whose accounts are reinstated from suspensions related to civil unrest under our updated protocol." If Trump posts more content that violates the standards, they will be removed and he will be suspended for between one month and two years, depending on the severity of the violation, he said.

"Our updated protocol also addresses content that does not violate our Community Standards but that contributes to the sort of risk that materialized on January 6, such as content that delegitimizes an upcoming election or is related to QAnon," Clegg added. "We may limit the distribution of such posts, and for repeated instances, may temporarily restrict access to our advertising tools. This step would mean that content would remain visible on Mr. Trump’s account but would not be distributed in people’s Feeds, even if they follow Mr. Trump.

"We may also remove the reshare button from such posts, and may stop them being recommended or run as ads. In the event that Mr. Trump posts content that violates the letter of the Community Standards but, under our newsworthy content policy, we assess there is a public interest in knowing that Mr. Trump made the statement that outweighs any potential harm, we may similarly opt to restrict the distribution of such posts but leave them visible on Mr. Trump’s account. We are taking these steps in light of the Oversight Board’s emphasis on high-reach and influential users and its emphasis on Meta’s role 'to create necessary and proportionate penalties that respond to severe violations of its content policies.'"