Can Marketers Reach the “Elusive Unicorn”?

Look no further than cinema for that attentive, diverse A18-34 audience. There has never been a time when more movies are heading to the big screen than now, and young adults are the driving force behind the many record-breaking box office successes of 2021.  Many brands today are trying to reach that elusive audience to successfully grow their business and maintain and reinforce brand equity. Data shows that Cinema advertising is the way to go. This media platform delivers the perfect combination of right target and right context for delivering your brand message.  Add to that the ability to reach these ‘elusive’ audiences at scale and in a brand safe environment - the winning formula!

The 2021 box office recovery has been turbo-charged by this valuable demo. As vaccination rates started to rise and theaters started to open, A18-34s headed back to the movies. Summer 2021 got off to a promising start over Memorial Day weekend, as A Quiet Place Part II scored the best three-day haul of the COVID era with $47 million, ultimately grossing over $160 million, the first film to do so since the pandemic began. 88% of the audiences in theater on the opening weekend were 18-34. Week over week, A18-34s have energized cinema showing up for titles in droves: close to 50% for F9, 50% for Black Widow and Free Guy, 59% for Shang-Chi, 69% for Candyman, and 64% for Venom. Most recently, Halloween Kills proved the top choice for this demo with 62.4% making the scary trip to see the new title on its opening weekend despite a streaming option.

This “unicorn” audience is cutting the cord (less than a third now get TV via cable or satellite), skipping ads when possible (71% skip/avoid ads whenever possible), and primarily consuming content on ad free platforms (Top 3 subs are Netflix, Prime Video, HULU or Disney+). Furthermore, when asked what their first choice for viewing content at home would be, for this age group, it’s a streaming service without ads.

“The data is continually showing this younger and diverse audience is the ideal consumer,” said Scott Felenstein, President, Sales, Marketing & Partnerships at NCM. “They’re well aware of where and how they want to spend their valuable time and money and the cinema industry stands to benefit.”

Educated, high-income ad-avoiders, this group spends more across many categories, including fashion, electronics, travel, dining and entertainment. Given their size – 92 million and a forecasted buying power of est. $8.3 trillion by 2025 – their appeal cannot be ignored.

So, what is the mythical platform that reaches this coveted group outside of TikTok? IT’S THE MOVIES! Yes, they are moviegoers. The average age of moviegoers is 28 compared to 58 and 53 for broadcast and cable viewers respectively. In 2019, 18-39 (30% of the population) bought 38% of the tickets, going to the movies on an average 10 times/year. And, as of early September 2021, based upon a survey of this cohort, they’ve made an average of 11 trips to the movies during the pandemic.  This is impressive when you look at the facts--Theaters across the country only started re-opening about a year ago and not fully with major markets like NYC and LA reopening this past Spring.

According to a statement by the Box office analytics firm EntTelligence, moviegoers paid an average ticket price of $12.87 to see Michael Myers’ carnage compared to Peacock’s at home ask of $4.99, “proving that no matter the cost, people love the theater… or at least prefer to be around others when terrified.”

Marketers Take Note, A18-34s Are at the Movies!

Cinema consistently ranks at the top of the ratings each week, showing that Cinema can hold its own when it comes to delivering this ‘unicorn’ audience at scale. The average theatrical release delivers conservative 2-3x the 18-34 audience than the average primetime program. Most importantly, Nielsen data shows that there is little overlap among moviegoers and linear media consumers.  Why? Because this audience has already cut the cord and has very light linear TV viewing habits. In fact, a reach overlap analysis between 18-34 moviegoers and linear’s top program – Sunday Night Football – shows that just about all the reach generated by Cinema in a month is unique with minimal overlap. Not only does cinema advertising deliver new viewers, these moviegoers are the perfect complement to broadening an advertiser’s reach beyond broadcast and/or cable TV audiences.  In certain instances, depending upon the media mix, Cinema can enhance a linear media audience by as much as a third or more when used in combination with linear options, the same applies when looking at a schedule with CTV as an option.

No matter how you slice it, Cinema brings to table an “unreachable” audience at scale, in a safe and in-context environment. So Marketers, you won’t find the cord-cutters, ad avoiders and affluent influencers on traditional TV, but instead happily at the movies every week. 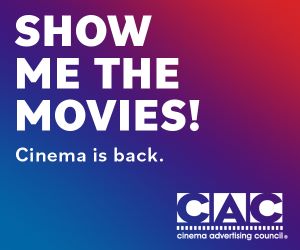