THE ECONOMIC CASE FOR TV ADVERTISING DURING A RECESSION

If there’s a silver lining when recession storm clouds gather, it’s that certain advertising opportunities provide brands a chance to get ahead.

Advertising during an economic downturn has well-proven benefits, including staying top-of-mind for purchase decisions, rebounding quickly, and even gaining market share. And because many large-scale advertisers pull back during downturns, brands that continue to spend see their ads grow even more efficient. There’s less competition for both media and consumer attention.

So why is marketing typically the first budget cut when analysts predict trouble on the horizon? Marketing principles don’t change just because the environment does. And historical examples show advertising grows in value during downturns. When times are good, advertising is important. In times of uncertainty, it’s crucial. 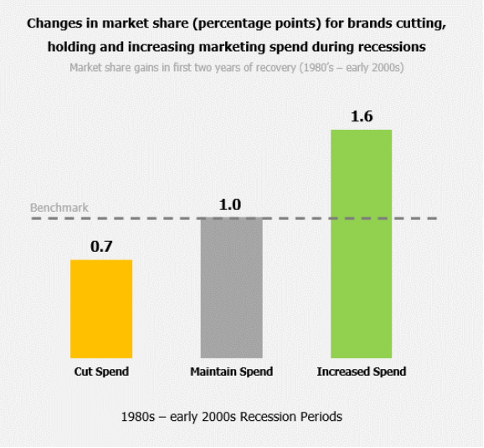 When times are good, advertising is important. In times of uncertainty, it’s crucial.

So cutting spend isn’t the right move. But deciding how to allocate that spend may require a new strategy. Brands rightly prioritize performance, focusing on the most efficient marketing channels. In practice, however, this tends to mean shuffling budget away from traditional channels toward digital. It’s understandable. Digital is easily measured. Its inherent accountability is reassuring for those worried about making every dollar count. But digital on its own isn't necessarily the best use of ad dollars.

Traditional channels, especially TV advertising, are ideally suited for driving business outcomes during an economic downturn. This statement may seem counterintuitive, but here’s why it’s true:

When uncertainty is high, trust matters even more for brands. And consumers still trust traditional channels far more than digital or social. 80% of customers trust TV advertising to inform purchase decisions. That's compared to just 61% trusting paid search ads and only 25% for online display. Double the number of people say TV advertising leaves a positive impression than those that say the same of digital. When establishing relationships with customers, TV gives brands an inherent advantage.

It's no surprise, then, that traditional ad spend is on the rise for the first time in a decade. More brands are prioritizing the built-in credibility of traditional media. Plus, traditional channels can help brands stand out in competitive categories and diversify marketing mixes overly reliant on digital.

2)    Awareness is key for getting the most from your ads.

Part of the rationale behind recession advertising is that you’re more able to drive awareness because there’s less competition. But digital channels alone don’t create the same top-of-funnel awareness as TV. So when brands continue spending but don't consider awareness, they fail to make the most of that spend.

TV advertising is still the best channel for brand building. But even more importantly, TV can successfully drive awareness for your brand without sacrificing performance. TV also increases the effectiveness of other channels—its “halo effect” can dramatically boost digital performance.

3)    Efficient media rates increase the likelihood of success on TV.

Many brands avoid TV because of the high costs. But as large-scale advertisers cut back their spend and drop buys, that inventory becomes available at highly efficient rates. Based on predictions of an upcoming recession, such openings are possible in the second half of 2022, even as general media prices increase.

The challenge, however, is finding these opportunities as they arise. Brands should leverage a media partner using artificial intelligence and automation to identify, and capitalize on, newly available inventory. Because as media efficiencies increase, so does a brand’s chances of achieving success with TV advertising.

As media efficiencies increase, so does a brand’s chances of achieving success with TV advertising.

It may seem odd to think about a recession being the right time to launch TV, especially for brands new to the channel. But successfully launching a TV campaign can mean gaining an invaluable growth driver for your business.

Although this is an opportunity with a time limit, testing TV when there's a built-in advantage can help brands prove the value of the channel while identifying what works for them. These learnings can then drive awareness and performance on the channel long-term. Because TV is a channel capable of future-proofing your brand, whatever comes next. 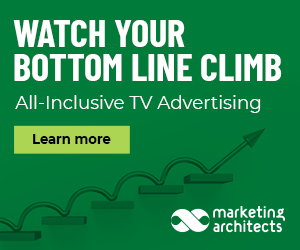