A couple of weeks ago I released a report called "Animated Gif Usage Surging." The key finding of that report was that animated gif usage had risen 35% in March compared to March 2009.

At the time, that was the only year-over-year data I had. However, now that a little more time has passed, I have more data, which shows an even larger increase. In March and April of this year, animated gif usage rose 64% compared to those two months during 2009.

The last few weeks, animated gifs have been used in retail emails at a proportion that rivals levels seen during December, when animation is traditionally used the most. Retailers were obviously very pleased with the boost that animation gave their emails this past holiday season and have committed themselves to using the design tactic more during the rest of the year. It's clear now that animated gifs are undergoing a serious renaissance. 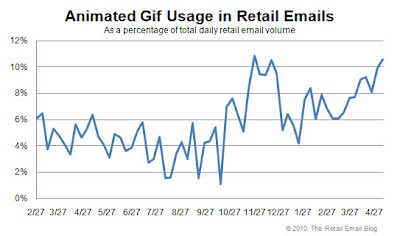 While animated gifs can inject excitement into an email and allow it to convey certain kinds of information much more effectively than static images can, there are a few limitations to be aware of:

1. Outlook 2007 -- as well as Outlook 2010, which will be released in June -- blocks animated gifs, displaying only the first frame of the gif. For that reason, we encourage you to not put critical information on frames other than the first and to avoid fade-ins where no information appears on the first frame.

According to the latest figures from Litmus, 9% of consumers use Outlook 2007. However if you are marketing to business customers, it's likely the percentage of subscribers using Outlook 2007 will be significantly higher, possibly as much as 50% or more, as Outlook is the de facto standard for corporate email. We recommend examining your own subscriber base to see how popular Outlook is.

2. Mobile email and Web support for animated gifs is currently quite poor. Currently the iPhone (OS 3.0 and higher) is the only major mobile platform to properly render animations, although other mobile operating systems are expected to follow suit in the future. The majority of other mobile platforms provide the same user experience as in Outlook 2007: the animation does not play and only the first frame of the gif is displayed. If your subscriber base is highly concentrated on mobile devices, the impact of using animated gifs in your emails may be diminished.

3. Animated gifs can significantly increase your email's file size. We advise keeping the file size under 300k, when possible, though we've done some really big files in the past that have pushed 700k and have still performed well. If your file size is exceeding those levels, try to reduce the overall footprint of the image by either reducing how much screen real estate it takes up, or by reducing how many frames it contains.

On a related note, you want to avoid having more than two animated gifs in an email, as two pieces of animation on the same screen will compete with each other for attention.

Please keep those limitations in mind as you explore uses for animated gifs in your email creatives.