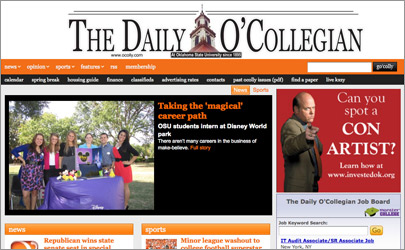 With college newspapers as strapped for cash as the rest of the publishing industry, plans are afoot to begin charging for access to online content -- but the new paywalls aren’t directed at college students themselves.

Rather, digital subscription company Press+ hopes to help college papers raise money by charging non-students for access, including parents, alumni and supporters. While some might argue that charging parents is effectively the same as charging students, older adults might conceivably pay for access to school-related news that is not forthcoming from their inarticulate offspring.

Fans might also pony up for inside news about popular college sports programs. College students are also unlikely to pay for access to online content when the print versions of many campus newspapers are available for free.

Beyond the college papers, Press+ has already built (and is currently operating) online paywalls using a metered model for Tribune Co.’s Baltimore Sun, as well as a number of smaller newspapers published by MediaNews Group and Lee Enterprises.

The Baltimore Sun began selling digital subscriptions to its Web site on Oct. 10. Like other big newspapers charging for online content, the Sun will combine free and paid access. Readers can see 15 pages per month for free, after which they will be asked to buy a digital subscription.

The New York Times Web site erected its own paywall in March of this year. Under the NYT digital subscription plan, visitors can view up to 20 articles per month for free on the site. After reaching this limit, they are required to choose one of three monthly subscription plans for further access.