The Future of Attention: A Conversation with David Pescovitz 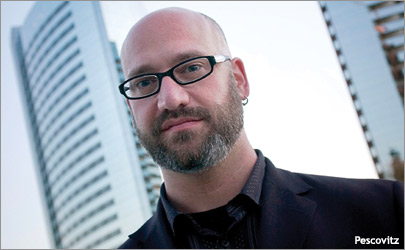 David Pescovitz is a writer and journalist best known for his work on science, technology and Internet culture. He is also a co-editor of Boing Boing and a director of research with the Institute for the Future.

What is the world we’re living in, with this constant stream of information, doing to us as a species in terms of our ability to adapt and thrive in this new environment?

You know, the old cliché, this idea of information overload? I would argue, you ain’t seen nothing yet.

We’re living in a world where it’s not just that everyone is connected via their iPhone or WiFi, but we’re seeing the proliferation of tiny sensors that go far beyond RFID tags. These are very small devices, eventually, perhaps, to be the size of a grain of sand in the next decade or two, probably. And they can keep a constant vigil on the world around us in a very high resolution. They can monitor the structural stability of buildings, because you can paint them on inside the walls, or sprinkle them on a farmer’s field and they can give a very precise picture of the water situation in the crops, or, throughout a city, to give you a sense of how people are moving and crowd dynamics. We’re moving into a world where objects and inanimate things can blog, basically. They can Tweet. There are already devices that you can put in your houseplants and they send you a text message when they’re thirsty. So, we’re giving non-living things voices.

Then, you have this unrelenting river of data. It requires new kinds of skills, and new kinds of technologies and tools for finding “the news you can use” for transforming that data into useful information that we can act upon, or that our machines can act upon on our behalf.

People talk about whether or not all this is making us smarter. You know, I don’t know about that, but I think it’s really all about accessibility of information. So, there has been an unprecedented level of access to information. And then, when we can offload more and more of that storage of information from our minds to the Web and to the cloud and make it accessible anywhere, anytime, then humans can start to do what we’re really good at, which is finding patterns in the information and making sense of it. We all become sense-makers. So, you start to see new tools being developed, because humans have always made tools. So, you start to see us develop new tools for sense-making and for filtering the data that is coming from the “Internet of things,” basically.

I don’t think our brains are necessarily changing. But I think we do develop new skills. It started with wanting more information, and being forced to deal with it and make sense of this onslaught that has led to a habit, basically, where we want more and more of it. Or, we think we want more and more of it. I actually think that, as we spend more time in these sort of fast-paced, virtually mediated experiences, there’s going to be this quest for authentic, visceral, focused, immersive and, in many ways, singular experiences. I don’t think sitting down and reading a book or watching a two-and-a-half hour art film are going away any time. I actually think that we’re going to see a renewed appreciation for those kinds of experiences, as they become more rarified.

Are we becoming addicted to information supply?

I don’t know. I mean, I don’t know what addiction really means. That’s within the realm of psychology and medicine. I can certainly say that I feel a sense of twitchiness when I don’t have access to my email during long meetings. And I don’t think that is necessarily a good thing. So, I guess you could probably argue that that’s a form of addiction in some way. Then again, maybe it’s also what was once an addiction. I mean, I think things change. As technology changes, the mores surrounding that technology change. Usages change. And it adds up to the way the world turns.

How do brands fit in? How can a brand successfully get its message and story out?

I think that you used the right word, which is the story. And I think the story needs to be authentic and honest and true to resonate with people. I think that that’s it. The sort of shifting away from some sort of target marketing, if you will. Who wants to walk around and be a target — with a big target band on their back too? Something that is somehow more about a true, honest relationship, and actually delivering really fine products and really good experiences is the secret to success. It’s not having a product that is sub-par and then trying to come up with a viral marketing campaign that is not likely to work, and often isn’t even related to the product, or it’s related to something entirely different. I think it’s about storytelling, really, and it’s always been about the story. I think the brands that succeed online and in online advertising are the ones with the best products and the best stories to tell. And that’s not new. So, the media may be new, but the message is built of fans.

Is there a sense of urgency for brands telling more authentic stories, given the new skills and tools you were describing people embracing?

Yeah, I think so. Having the tools to generate and distribute your own media content, to create your own Web video shows, and your own music, and potentially reach a global audience and knowing the people, without the need for deep-pocketed middle men, means that you inherently have to deconstruct the messages that you’re receiving in real-time, because you know how they’re made. You know the techniques. So, for people for who media creation has become a native tongue, I think the only way to connect with those people is through honesty and through authentic engagement, because any attempt at manipulation, even subconscious ones, the system will work around those and people will be able to deconstruct them in real-time.

I [Brian Monahan] wrote a blog about this idea of peak media, if there is a peak mediation. Is there an upper bound, or is there just going to be more and more and more information coming at people in real-time?

Well, I think, for now, you can always just close your eyes.

And stop listening. I think peak media is an interesting concept. But we’re all media. Right? We’re all going around spreading messages and information. So, media is already ubiquitous. I just think people shift around to the form that they prefer, the “media du jour” for spreading the message. I think people do that. They often find the pulse of the new media, whatever that media may be, even if it is not necessarily the appropriate media for telling the story that they want to tell.