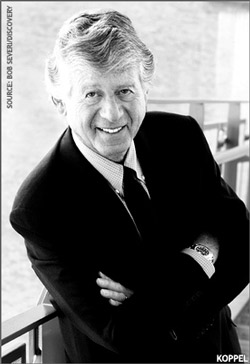 Ted Koppel, who spent years hosting “Nightline” on ABC, will be back on broadcast TV later this month. The well-respected interviewer will join the upcoming NBC prime-time newsmagazine fronted by Brian Williams as a special correspondent.

Steve Capus, president of NBC News, stated that Koppel “has touched every major news event spanning nearly five decades. Not only does he bring a tremendous amount of experience to the broadcast, he is a tireless advocate for quality journalism, and is one of our profession’s premiere storytellers.”

There was no word whether Koppel, who spent 42 years at ABC News, would have any further relationship with NBC News. He left ABC in late 2005 and took a post with Discovery Channel; recently, he has been a contributor on NPR.

NBC described the hour-long “Rock Center” as “built around the week’s most provocative events, compelling coverage, and newsmaker interviews.”