The Future of Search: A Conversation with Stefan Weitz, Microsoft's Director of Search and Director at Bing 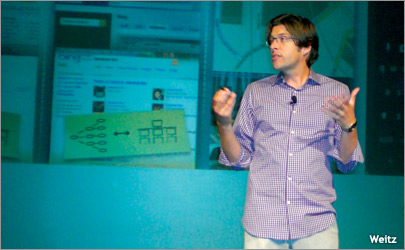 Where are we in the evolution of search and navigation?

Well, it was text-based for 20 years and pretty much comprised of pages with links. The way I describe the Web of today is a high-definition proxy for the physical world. Meaning that everything you can touch, taste, feel, look at, talk and converse with, have an interaction with. Almost everything on the planet has been modeled, in some shape or form — some more than others — in this digital context. Everything, from little puppies to the shoes that I’m wearing, to the coffee cup that I’m drinking out of. They all have been described in ridiculous detail on the Web.

So, the coffee cup that is in my hand right now has been described on a hundred sites, from the manufacturer to the marketer’s site, to the sales site, or whatever. We go through all that data, to reassemble it back to a singular place where I can describe this cup in particular detail. That is the first big challenge, just to have that viewpoint.
The second challenge is to figure out when a person is asking a question of an engine, like, “Where do I buy this coffee cup?” It’s no longer good enough simply to use the old ranking, where he looks for 10 locations that halfway fit it, and have descriptions in each case about a coffee cup that I have. That’s silly. It’s ridiculous. The question you’re asking is a very clear, intense question. You’re asking: “Where can I buy that coffee cup?” What we have to understand now in search is that, for this coffee cup, the first three had attributes including places from which I can purchase it. Now, it’s a matter of connecting that intent to view something with the real-world, in this case, this coffee cup, and, “where do you sell it?,” and literally connecting those two disparate worlds together to steer the action of that person buying my coffee cup.

How are human beings developing these skills to access information beyond how we’ve learned over the last 15 years — to go to the query box and type it in.

That’s a huge area to discuss. I’ll start from the beginning of search, where we have a search box, and a specific query in place, and you have the links in place, and then you have to parse through those to figure out which you actually want to go to. And to do that effectively required almost a whole new body of critical thinking that wasn’t there a generation ago. It’s understanding sources and understanding captions and understanding all this information that has to be said on the page to help you decide where to go and, ultimately, where to “right click.”

I think where the future of all of this is going is that the search engine itself is actually handling the computation, or the parsing that, today, can be taken on by humans. In other words, there are a lot of things that computers are really, really good at — you know, matching data and identifying massive amounts of data, identifying patterns of matching data, distilling all that data down to something that is consumable by a human. This is something that I think of as our Farecast product here at Bing does very well. With airplanes, it basically predicts whether or not a particular price or a particular route, on particular dates, including the yields, are going up, or going down. So, it helps you say “yes, I’d like that — I think I’ll wait only one hour.” By the way, it can do about two billion price combinations every single day, from all the different airlines, including the store pricing, including price windows, including holidays, and then ends up with a prediction.

Now, humans will never do that. So, things like that, where we can offload, as humans, these kinds of data-centric things and do something that is a higher order of business — things that humans are better at doing: identifying nuance and making decisions based on intangible factors, or knowing that a particular style of shoe hurts their foot and they wouldn’t buy that kind of shoe for them. These types of things are all where humans actually will be more useful, if you will, when the systems themselves become more adept at parsing through a lot of information on their behalf.

It seems like the machine is going to alleviate the need for the development of some of the skills in critical thinking that humans have needed, to date, to successfully navigate a text-based, query-box-driven result. But, presumably, there are new ways to access this information in the structured information world, to present themselves, like a Google search. What sort of skills is that person going to need to develop?

I think the most important skill will be able to accept the amount of intelligence coming at that person on a minute-by-minute basis. Search literally will be a part of every single thing with which one interacts — from your phone to your television to your computer to your tablet — even when you’re making a phone call. These are all examples of where people are doing searches, almost unconsciously.

I pulled my phone out during a trip from Idaho yesterday, just checking to see the map from where I was to where I needed to get to, and I was curious about the traffic conditions — whether the cars were moving or not. Or another example is, I really am starving for food, and I’m just looking for a place around me where I could eat. These are very simple examples, but these are searches, and I’m taking multiple inputs where I’m at, and I’ve got all these different inputs coming in, and they factor down to presenting a result that I, in fact, can make a decision on.

But the challenge that humans are going to have to face is that the number of searches that we’re doing on a given day are multiplying and intensifying by orders of magnitude, where, initially, it was a very directed search. You went to a search engine and did a search. Now everything that interacts and has this capability to access and sort all this information on the Web.

That is going to be one of the biggest challenges. Even, for me, today, I literally have three machines in my office, and I have four screens on at all times. I am typing information for staff on our current systems. I am on Twitter and Facebook. Yet, I don’t do a great job parsing it. It’s almost overwhelming to me.

Do you buy this analogy of the development of a new sense — a sort of information sense? And, if so, do you think there are other senses that we’re going to have to develop down the road?

“Information sense?” I do love that analogy. There is something else beyond our five senses that we have grown over the past several thousand years. There is something else developing, because, even though the Web is this highly efficient proxy of the real world, it is still once removed. So, no matter how good we make the experience of the reality, or slap an overlay of information onto your vision, I do think, as humans, we still need to touch things and to feel things and see things. We need to use our five senses before we can make use of our sixth sense.

Now, there may be something there, I don’t know what it’s called — the information sense, or the knowledge sense — an ability to re-associate something worth seeing online with something that exists in reality or in the physical world. But I think even that will become less important, especially as we get things like augmented reality, where I hold up my device — or the stuff I’ve seen out of the University of Washington where they’re using contact lenses that you wear — that can overlay all the Web’s data across your vision, as you’re looking around your city. You may literally be able to just look at something and have it described in detail to you, or help you with navigation, or to help you look for a statistic, etc. And we think these things are fantastical and almost science fiction-y. But you begin to look at the data we have on the Web, and how we are assembling that data in the object-oriented Web, and the advances we’re seeing in computing, and the ability to augment computer vision with this new layer of information and knowledge. It is actually not that far off.

To me, the more I talk about this, the more I think the challenge in development is one around the timing in getting the knowledge we’re receiving. When do I want it? You know, when do I want to make use of it? I think people are bombarded by the data and the knowledge, but I don’t mean “bombarded” in a pejorative sense. I think that our lives will be enhanced by the fact that we’re able to have a silicon assistant, if you will, that can remember things for us, make correlations for us, help us analyze large amounts of data in the world around us and give us that information in real-time.

There’s this concept of the “dark Web,” which is that we think we only have access to about 5% of all the knowledge actually stored out there on the Web. So much has been firewalled, or it’s on paper, and it’s on company databases — those sorts of things. It’s just a matter of the “dark Web” becoming light.

I think there it is very much of the former.