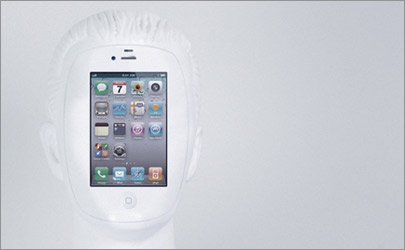 What happens when people become media?

After reading this story, you may think that Paul Isakson has lost his mind. And you would be partly right, because Isakson believes he is a cyborg. You know, a creature that is part man, part machine. But he hasn’t actually lost his mind. He has simply stored a part of it in some machines for safe keeping, and that is why he believes he is a cyborg. It is also why he believes you most likely are too, because whether we think that way or not, we are all becoming part machine.

“How many phone numbers can you remember now versus before you had a cell phone,” Isakson says, giving an example of one of the many machines he uses to “back-up” his brain’s memory. And it’s not just numbers that Isakson offloads to the hand-held devices, but physical experiences.

“If I see something interesting that I want to remember later, I take a picture of it and email it to myself,” he explains, adding that he used to joke that his phone had become an extension of his memory, “but it’s not a joke.”

Okay, so most of us can probably relate to this experience, but what makes Isakson so unusual is that he studies a new field of science growing up around it, and uses it to develop advertising and communications strategies for some of the biggest brands in the world. As head of strategic planning for Colle+McVoy, the Minneapolis ad agency owned by MDC Partners, Isakson has begun studying cyborg anthropology, an emerging field that seeks to understand and explain what happens when people fuse with machines and technology.

The field may best be known by futurists like Ray Kurzweil who have popularized the notion of “transhumanism” and the concept of the “singularity” moment – the point at which people and machines will literally merge into one. Kurzweil has predicted that moment will come in 2029 – a mere 18 years from now – due to advances in technology, particularly nanotechnology and artificial intelligence. Because by then, machines will be as smart as we are – or smarter – and they will be small enough to put the power of supercomputers inside our bodies.

The timing of that moment may be debatable, but scientists say its inevitability is not.

“It’s a vexing question,” says Ben Goertzel, an author, academic and leading scientist in the field of artificial intelligence, who is also an advisor to the Singularity University and Singularity Institute. “Technically, it’s all possible, but what develops, and when it develops, will depend on other factors that are cultural, political and economic, as much as technical ones.”

Goertzel says technology is actually moving fast enough that these changes could happen “sooner than we actually think,” but that the big impediment will be the willingness of people to accept them. While the cultural and political implications seem obvious, the economic ones may be less so, he says, especially for an industry like media, where people like Colle+McVoy’s Isakson have already begun offloading some of their humanity to machines. As we increasingly become one with those machines, Goertzel believes it will further disintermediate the role – and displace the economics – of big media companies, making us, in effect, our own media.

“I would be worried if I were a media executive in a major media company, because I think you could make a lot of money by shorting all the stocks of the big media companies,” he says. “Technology is bring us more toward peer-to-peer and AI is certainly going to help that.”

In other words, Goertzel believes that big media companies had their shot in the evolutionary cycle, and lost, because people are simply going to evolve into their own media, without the need for outside intermediaries. That’s because the most important intermediary – technologies that can filter information – will be inside of us.

Goertzel’s concepts may be difficult for people with contemporary human intelligence to comprehend, which may itself be contributing to the cultural impediments. For example, he says society is currently consumed with social media, and is prioritizing economic, political and cultural capital to support the development of social networking technologies. These cultural and social “biases,” he says, will determine what technologies get developed fastest. If, on the other hand, society made the same commitment to the development of AI that it put behind mapping the human genome, Goertzel believes we could have huge breakthroughs sooner than predicted.

The implications for marketing are huge, he says, and not necessarily negative, because technology could help consumers process what can be an overwhelming marketplace of information about products and services. And brands, especially effectively communicated ones, he says, can be powerful intermediaries.

That’s where people like Colle+McVoy’s Isakson come in, and why he is spending so much time talking to cyborg anthropologists, many of whom believe we’ve already fused with media machines, and it’s only a matter of degree and progression. People have already moved well beyond offloading phone numbers and pictures to cell phones, and media technology has progressed from helping people remember things to telling them where to find things (search), to telling them where to go (physical navigation systems), to telling them what to do.

Agencies and marketers who understand the role media technology plays in mediating and augmenting how humans think and behave will have an underlying advantage in the marketplace as people become more dependent and more connected to those technologies.

“When will people become their own media? It’s a big question that we’re trying to figure out,” he says. “But to some extent, we’re already there.”