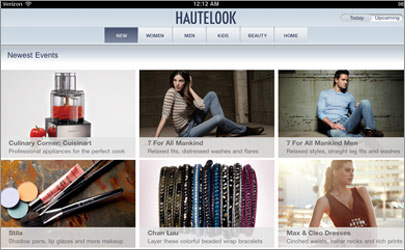 Flash sale provider HauteLook has pumped up its mobile presence this past month with the release of multiple new and updated apps. The company, which launches new limited-time sales events every morning for a range of items, says it is seeing 15% to 20% of all its commerce coming through mobile channels.

The time-sensitive private sales have been running on an iPhone app and a mobile-friendly site since late last year. HauteLook Senior Vice President, Marketing Greg Bettinelli says that people often opt for their mobile phones instead of the desktop PC to catch sales that start at 8 a.m. Pacific Time.

Mobile drives even deeper engagement and shopping than the standard Web.

“We’re seeing that mobile actually encourages more interaction, with mobile users shopping more frequently and spending more per order than non-mobile users,” he says. iPad users in particular are spending 20% more on purchases per visit than Web site visitors. “Also, when we look at our base overall, our very best shoppers strongly over-index in mobile usage and shopping,” he says.

HauteLook actively promotes its mobile presence with the user base and through targeted campaigns to mobile users. "The growth outpaced our expectations," says Bettinelli.

HauteLook sends 220,000 daily alerts to iPhone and iPad users, a number that has increased 20% in just the month since the iPad launch and mobile app relaunch.

In late September, the company updated its app on the iPhone platform and issued an Android version. A new iPad/tablet optimized app also launched at the same time. Each offers faster performance and larger product images. The iPad app gives members a view into the sales that are launching that morning and previews of upcoming sale events, providing an alert function and purchase history.

Bettinelli says there is an expected spike in activity in the morning around the time the sales start, but he also observes considerable item browsing in the evening on the iPad. He says that 64% of mobile users report accessing HauteLook mobile while at home, with mobile browsing increased by 50% on weekends. “Interestingly, the adoption is not just coming from existing customers,” he says. “We’ve acquired tens of thousands of new members through our apps.”

HauteLook has also been leveraging its mobile presence in innovative marketing partnerships. Last month, the site worked with app agency Skyrockit to promote the Sarah Jessica Parker film “I Don’t Know How She Does It.” HauteLook fed flash sales into a promotional app and offered sales of items found on characters in the movie as well.