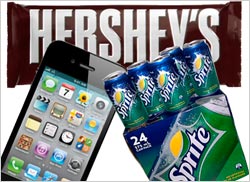 Apple, Hershey’s, and surprisingly, Sprite (not Coke or Pepsi) are three of the top brands for youth, according to the 2012 Harris Poll Youth EquiTrend study, by Harris Interactive.

The annual study benchmarks the brands that America's youth prefer and those that have the ability to dominate their industries' youth market share. The study measures brand equity as an outcome of familiarity, quality, and purchase consideration among Americans ages 8 to 24. Equity, emotional connection, and brand advocacy are evaluated.

Young Americans are expected to spend $211 billion in 2012, according to Harris Interactive. Companies need to remember that consumers do not magically appear at age 18, said Regina A. Corso, senior vice president for youth and education research at Harris Interactive.

"Youth of today have spending power and they also have loyalty to brands,” Corso said in a statement. “Some of this comes from their parents, but they also make their own decisions. Brands who tap into this loyalty when a consumer is a tween, and nurture it through the teen years, will have an extremely loyal customer by the time the customer is a young adult."

This is good news for Apple, and indicates that their brand is very strong, said Jeni Lee Chapman, executive vice president of Harris' Brand and Communication Consulting practice. “To have this kind of significant edge among 13- to-24-year-olds signifies that Apple has built a powerful equity base among their customers of today and their customers of tomorrow," Chapman said. "Brands often struggle to maintain relevancy among different generations. This data shows that this is not going to be an issue for Apple."

In the food category, although 8- to-24-year-olds have varied interests, certain comfort foods, like cookies and candy are timeless. For example: Oreo Cookies and Hershey's Milk Chocolate Candy Bars are each highest-ranked in their respective categories, and sweet treat and cookie brands receive some of the highest equity scores among those surveyed.