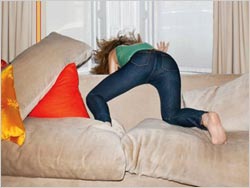 Usually, we here at the Social Media Insider try to be smart about things, but occasionally we must wallow in the eternal dumbness of the modern world, and this is one of those times.

I’m talking about Chapstick. Just in case the controversy over the new, revamped, recalculated Klout scores wasn’t enough social media controversy for one day, Chapstick yesterday proved to be another social media gift that just kept on giving. But, it’s not for the reasons you may have read elsewhere on the Web. It’s in some, subtle ways, even sillier than that.

The story begins with a woman’s derriere. It’s the featured body part in a Chapstick ad (see above) that asked the question of where lost Chapsticks go, anyway. Why the derriere? Because the woman in the ad is seen looking behind her couch in search of her lost Chapstick, so, instead of seeing her lips, we see her cheeks.

It’s the kind of ad we see all the time, and, had a blogger not complained about it being sexist, it’s just the sort of ad that most of us would never notice. In my view – and the view of at least some of the many who commented – this ad just doesn’t rise to the level of something to care about. At all. And not just in the context of our current riled-up world of Greek debt crises, murdered dictators and Occupy Wall Street protesters who have a cleanliness problem.

But rise to the occasion, some did, and when they complained about the ad on Facebook, Chapstick apparently deleted the offending comments again, and again, and again, which, of course, caused the riled up to become even more so. Then, predictably, Chapstick engaged in the semi mea culpa expected of virtually all brands that don’t get it, saying that it was simply forced to: “remove posts that use foul language, have repetitive messaging, those that are considered spam-like (multiple posts from a person within a short period of time) and are menacing to fans and employees.” The comments were against Facebook policy, you see.

I couldn’t react to Chapstick’s lame-o explanation better than AdFreak, so I won’t. That blog said: “So, to those ChapStick fans whose comments were deleted—it was all your fault, you obnoxious, foul-mouthed, menacing spambots!”

But part of me was totally bored with this whole Chapstick movie, because if you’re in social media, you’ve seen it so many times before. Wake me up, I thought to myself, when the client gets it.

But here’s what got me out of my ho-hum stupor: a visit to the Chapstick Web site, which encourages fans “to be heard on Facebook.” No, it wasn’t even the irony of those words. When I went to Chapstick.com last night, every time I clicked on the link “Be Heard on Facebook” the first thing I got was a legal disclaimer, basically explaining that the folks at Pfizer, Chapstick’s parent, couldn’t vouch for those third-party Web sites and all of the nutty things people might do or say on them. It reads:

“NOTICE: You are now leaving Chapstick.com, a website of Pfizer.

Links to all third-party Web sites are provided as a resource to our visitors. While we strive to provide links to useful and relevant Web sites, we have no control over the content and nature of these sites. We are not responsible for the contents or reliability of any other Web sites to which we provide a link and do not guarantee, approve, sponsor or endorse the information, products, views or any of the content available at those sites. Please be aware that when you leave our Web site, other sites may have different privacy policies and terms that are beyond our control.”

Wow, I thought, that’s a first. And it also was the smoking gun, proof -- if the rationale behind deleting posts from angry fans wasn’t enough -- that Chapstick’s social media strategy was being run by the Pfizer legal department, which doubled-down in the face of faux controversy. (BTW, if you decide to continue on to Facebook after all this, it doesn’t even take you to the Chapstick brand page, which is a column in and of itself.)

So, what do we take away from all this? That sometimes people get offended by pictures of people’s backsides, and that social media strategies should never be run by the legal department. We knew that already. Which makes it all the more astonishing that this actually happened late into 2011. In the meantime, a note to Chapstick: Call us when you’re ready for your close-up, because you sure aren’t ready right now.