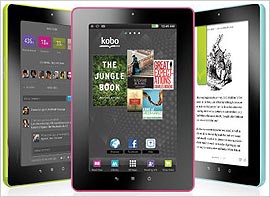 The Kobo eReader is one of those outliers in the connected device world that you see here and there at retail but aren’t quite sure what to make of. The dearly departed Borders Books pushed the device and its ecosystem of 2.5 million ebooks. Up against Kindle and Nook, however, Kobo seemed like a curious entity that had no particular claim on the market. The company is getting some serious merchandising and marketing armaments, however, as it gets acquired for $315 million by Tokyo-based e-commerce services provider Rakuten.  This company, which claims to be one of the top 3 e-commerce companies in the world by revenue, has e-retail reach into the U.S. at Buy.com and throughout the world in countries like Germany, Brazil, Taiwan, China and of course Japan.

The deal gives  Rakuten device presence in many regions that may be outside Kindle and Nook’s reach. It also gives it a mini-tablet in the Fire/Nook Tablet mold. The Kobo Vox is a 7-inch, Android-powered, $199 multimedia viewer. In addition to books, Kobo has Zinio on board as well as relationships with many magazines. It appears to have a vast library of Android apps it lets in as well.

Kobo claims to have the largest library of eBooks and says that its devices and cross-platform apps (present on most smartphones and tablets) have unique social features that integrate Facebook and Twitter.  You can share thoughts about a book or magazine you are reading from within the title.

With the introduction of the Fire, Kobo may have to wiggle downwards on price to get traction in the U.S. market, but the device does seem to represent a credible low-end alternative to customers who don’t want to buy into Amazon’s grasp or pay the $50 premium B&N seems to think the Nook Tablet merits. In just about every tech category there always seems to be room for a bargain version that is good enough to mimic premium products if the price is right. Kobo is already present at many mass retailers like Walmart, Best Buy, Target and WHSmith. There is a position here for a major third e-reader player, and I haven’t seen a lot from Sony that impresses me other than its relentless marketing budget.

Moreover, if Amazon and B&N keep their app gardens tightly gated against too many Android apps, there is a case to be made in the market for a more open approach. Even in a cluttered market there are still niches to be carved.  And Rakuten has the heft and penetration to give an also-ran device a shot at filling a need.