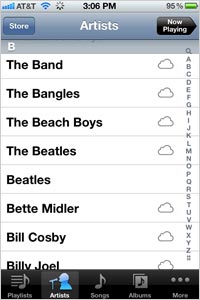 Without the usual Apple fanfare about reinventing something or other “as we know it,” the long-promised iTunes Match music service rolled out in an update to the iTunes library and player software on Monday. This $25-a-year service amends the iCloud infrastructure that the company introduced with iOS 5.

In its first stage, the iCloud allowed you to maintain access to any previously purchased and downloaded songs and apps you may have gotten from Apple. You could also back up your devices to up to 5GB of free virtual storage instead of to your desktop hard drive. iTunes Match now lets you access from the cloud even music you didn’t buy from Apple.

And it works pretty much as advertised. After updating iTunes to the latest version, I was able to activate the service and pay the fee straight from my usual App account. For me the service makes sense because of the many devices, including the Apple TV and Mac Air, in the house. I no longer need to be on the home network to enable resource sharing.

I also have about 1,700 music tracks I accumulated through rips and other services over the years. It takes about ten minutes or so for the iTunes Match service to scan the hard drive and upload data (not the tracks themselves ) to the cloud. What iTunes Match does is find its own copy of your track from Apple’s licensed library and then uses that for subsequent downloading to other devices. Unlike the Amazon Cloud Player and Google Music, you aren’t uploading your files to the cloud.  In many respects it was giving me an upgrade, because Apple uses higher bit rates for these iTunes Match-ed copies than I originally had on disk.

iTunes Match did an excellent job of matching an overwhelming majority of my tracks. Apple appears to have secured most of the necessary licenses to make this happen. The experience in this regard is better than the one I had with Spotify. Recently launched in the U.S., this music subscription service combines your existing track library with streaming tracks from its library. The premium product lets you access on mobile your “local” files by using a similar matching system. Spotify’s library did not appear to cover as much of my back catalog as did Apple. What Spotify does have going for it that Apple does not is a streaming model. Apple’s approach to iTunes Match, as it is with iCloud, is to allow you to download a file to your local device from the cloud.

The service successfully reproduced my playlists from the main PC in the cloud and let me see a shadow copy of the contents in my devices. iTunes Match does stream in a fashion, in that tapping on a track will begin playback after a short buffering time and while it downloads. Also my iTunes Match tracks seem to stream to my Mac Air without downloading.

I am not convinced of the real utility of the download model when it comes to music on mobile devices. Granted I have only been testing both Spotify and iTunes Match for a couple of days now, I prefer being able to maintain my tracks and playlists apart from the device itself so I am not using precious local storage. Until now it has been my choice to keep the iPhones I buy lean since experience shows I just don’t use 32GB on apps. iTunes Match may blow that plan.

Spotify may not have quite the library of iTunes but its streaming experience is superior. The company deservedly prides itself on super-fast response times so that tapping a cloud-based track feels like instant-on. Apple doesn’t even try for that effect.

Apple TV may be one of the places where the iTunes Match service is of greatest value. Even though most Apple TVs can access a Home Sharing network via iTunes, I have consistent problems getting it to communicate with my main PC, and it requires that iTunes be open. With iTunes Match enabled, almost all of my music library as well as all of the music videos I have acquired from Apple itself can play into the home theater. I also noticed that music videos felt upgraded from their desktop resolutions.

iTunes Match is not a game-changer so much as an expected next step. With seamless cross-platform on demand access to things like Netflix, cloud-based access to our music collection from a range of devices doesn’t seem like a revelation. It feels pretty much the way it should be by now.