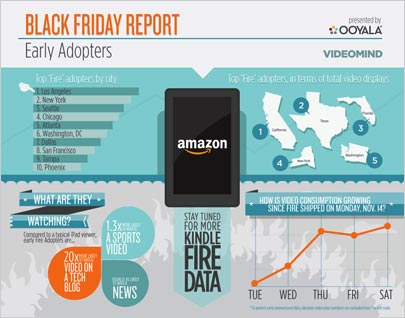 Coupled with the news that Black Friday was good to retail came happy news for the online video business — the Kindle Fire has been kind to video so far. Online video technology provider Ooyala released some early data on Kindle Fire usage confirming that users are indeed watching video on the new tablet.

Sure, the bulk of Kindle Fire users may be playing Angry Birds and some may even be - gasp - reading eBooks, but video is part of the device’s draw. Ooyala reviewed device video plays in the United States for the five-day period starting Nov. 14, the day the Fire began shipping, and found Kindle Fire users were 20 times more likely to watch videos on a tech Web site than the average iPad user.

But lest we get all excited about this stat, Ooyala offers a caveat: “We chalk this up to an early adopter effect: technology enthusiasts tend to get their hands on new gadgets first and they tend to like tech-related content,” the company said in a post on the findings. Perhaps underscoring this tech enthusiast effect are these other nuggets — Ooyala said Kindle Fire users were 1.3 times more likely to watch a sports video and equally as likely to watch news as iPad users. Those numbers suggest video usage on Kindle Fires may be more akin to the established tablet norm.

Still, these figures highlight what had been hoped for in the video business — that the rollout of the new tablet could potentially give a nice boost to video usage. Even if the lift is commensurate with iPad usage, that’s still a good thing for online video as the Fire seems to be providing yet another venue for video consumption.

Ooyala also said that the amount of video watched on these new tablet devices is “undeniably increasing” across the country. Big urban centers like Los Angeles, New York and Seattle topped the charts in terms of delivering the most video plays. Seattle was home to the most video plays per capita, while California bested Texas as the state with the highest number of video views.