The Silent, Monetizable World Of GIFs 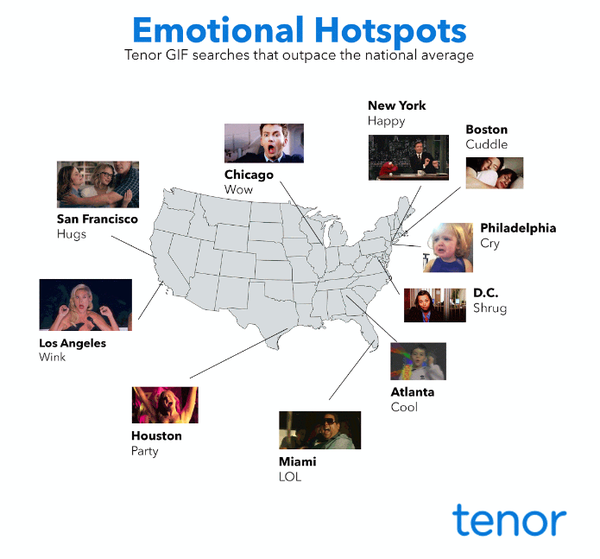 Sorority sisters one of the Greek homes at USC “speak” only in Harry Potter GIFs -- a way to communicate on their smartphones that bonds them the way a secret handshake might have done many years ago.

But this isn’t many years ago or even five years ago. This is now -- an era of new ways to communicate that seemingly excludes actual speech. It's everywhere. A couple of hours ago, The Hill reported that Ukraine’s official Twitter feed just used a GIF* from “The Simpsons” to mock Russia.

Every year, smartphone GIF pioneer Tenor counts 72 billion GIF mobile search requests (200 million a day, but searchers look for more than one term). Tenor is just beginning to attempt to monetize those millions of quick images.

When you search for a GIF that says you’re SO tired, wouldn’t the image of a bleary-eyed person sipping from a Starbucks cup be a good GIF spot? That’s the commercial idea.

The GIF (for Graphics Interchange Format) has actually been around for 30 years -- its precise anniversary may have occurred yesterday.

But their utility for something other than just a quick, repeating graphic is because of the smartphone, says David McIntosh, the CEO who founded Tenor in 2014. That’s where Tenor made its mark. It transacted one million smartphone GIF downloads in its first month in business.

“The phone. It started as communication. You would call to talk to someone,” McIntosh intones, sounding a little like the narrator of his own retelling of history. “As phones got digital, texting became the preferred method of communication. The challenge with texting is that we have such a rich language now, for a thousand years, people could write beautiful letters and draw on this wonderful vocabulary.

“But you can’t do that with texting. It’s been reduced to LOL or WTF. What Tenor does is restore that massive vocabulary so you can tap into all the thoughts and emotions at the back of your head, but you can do it in a very short period of time. Really, the magic in the last two and a half years is that it’s become a language, a way for you to express yourself daily.”

The new Tenor Insights is an “Emotional Graph” dashboard refreshed by 200 million users every month -- which McIntosh says can pinpoint the emotions of the moment --hungover blurs on Saturdays and Sundays, contentedly not very “tired” (surprisingly) during holidays.

San Francisco-based Tenor can splice the data the ways an advertiser would want it. (Or the way a reporter would, too. Check this out: Tenor tabbed the most dominant emotional GIF requests for big cities around the United States - -a “wink” for Los Angeles, a “shrug” for Washington, a “cry” for Philadelphia, and so on.)

So far, its videos have been supplied by its users and willing marketers, like Hollywood studios. Twentieth Century Fox was able to promote “Taken 3” before it was well known,with a few good GIFs.

“For a ’YOLO’ GIF, you know, You Only Live Once, you’d get Liam Neeson jumping out of a window [from that film],” McIntosh says. “Everybody wanted to use that.”

In March, Tenor brought in Jason Krebs -- a veteran of Maker Studios, Conde Nast and Tremor Video -- as its chief business officer, and to market those briefest of branded videos. McIntosh thinks Krebs should have a pretty good pitch.

“When you think about the top five tech companies by market cap, three of those five are all about turning user data to monetize it in some ways. The opportunity is for us to do that around this new pillar of emotional data, to understand what people are feeling at any given moment across the world.”

Pricing GIFS at a cost per share, he thinks, works because every GIF is a guarantee that at least two people have seen the image -- the person who chose it and the person who receives it. “When is the last time you didn’t open a text message?” McIntosh asks.

ADDENDUM *I would be remiss to avoid discussing the pronunciation of GIFs. Steve Wilhite, programmer who invented them for CompuServe, pronounced it with a “soft G” sound as in Jif, the peanut butter. The preferred pronunciation seems to be with a hard G, an in “guttural.”

When we first launched two and a half years ago, GIFs weren’t really a thing. So at dinner parties, people would ask, ‘Oh what do you do and I’d say, “Oh, I’m with Tenor we have this GIF keyboard.' And in a party atmosphere, people would ‘hear’ a T on GIF and say, ‘Oh, like Amazon,' a keyboard where people could send physical gifts. So for a period of time I started using GIFs, with a soft G, because nobody could confuse that with gifts.”

Though he says he uses both, he likes the Japanese way. That’s “G-I-F.”