Even President Obama Had A Cyber-Monday Mobile Sale 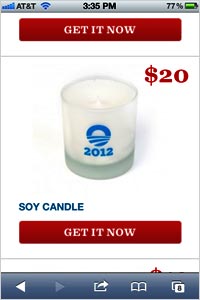 While decidedly less crowded and rambunctious, yesterday’s Cyber Monday proved to be just as noisy and hype-filled as last week’s shopping Super Bowl of a Black Friday. The emails were flying into inboxes all weekend, and anyone who subscribed to mobile alerts also got bombarded with the specials.

And lo and behold, even our president got into the act. “Get 10% off $10 or more today in the Obama 2012 store using the discount code MONDAY10%” read the SMS message I got on my phone on Monday afternoon. Now, to be sure, registrants to the famously tech-savvy Obama campaign’s messaging have gotten key reminders over the past two years about everything from support needed for pending legislation to live appearances. But the last thing this citizen was expecting was his President and Commander-in-Chief hawking the goods on Cyber Monday. Hail to the sale! I feel like Charlie Brown passing by Snoopy’s prize-winning, decked-out dog house in the famous holiday TV special. Good grief, has everyone bent to the prevailing winds?

The BarackObama.com site is run by the Obama for America group. It runs an online store that includes items like an Obama collegiate hoodie for $50, an Obama/Biden Christmas ornament for $40, a $95 basketball jersey with #44 (as in 44th President) for $95, a Soy Candle ($20) and even a (we kid you not) dog bandana ($12), all with the President’s election logo.

According to the National Retail Association, the number of U.S. consumers who planned to use mobile devices as part of their Cyber Monday shopping has doubled since last year, from 7.3 million or 6.9% of online shoppers, to 17.8 million or 14.5%.