Millennials Are Brands; Brands Are People 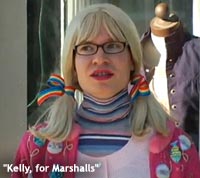 The Business Insider Ignition conference in New York brought in its share of precocious Web natives recently liberated from MIT and other points north. But the insights came hard and fast at the event, held at the Time Warner Center in New York. The location is ironic, given the consensus among speakers and panelists that big traditional media as a monolithic network enterprise is gone, and the media is now a network of nodes comprising individuals like those walking around the streets of New York 10 stories below the conference room.

One comment came from Alex Kazim, founder and CEO of Ongo -- that $500 will soon be too much for a tablet, and that eventually the sweet spot will be $200. "The Newton failed because the Palm Pilot was $200 and Newton, $700."

Next up was Matt Briton, CEO and founder of Mr. Youth, who spoke about the perpetually elusive Millennials, beginning with the misconception that they don't have lots of money. Well, they don't now, but they will. "They will have more spending power in five years than Boomers have now," he said. "They aren't rebellious, they are humble. But the paradox is that they look at someone like Mark Zuckerberg, who created a business in a dorm room, and feel that that kind of success is achievable. They think the sky's the limit."

He said that while the class of 2010 was all about brand and bling, the class of 2015 is about showcasing your own brand and persona. "This generation realizes that once they get out of college their resume won't be enough. They realize that their personal brand -- what they have done, what have they created, what they have they built -- is what matters." The takeaway was that young people are becoming brands, but brands realize they must become people.

In terms of media behavior, no surprise here: 86% of Millennials are cutting the chord on cable, opting for online only. "The TV used to be the central place in dorm rooms."  He said that Hulu, Netflix and YouTube have supplanted cable in media consumption among that demographic.