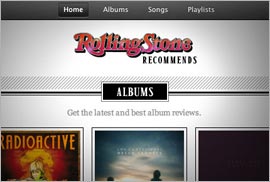 The music subscription service Spotify reports it is bringing apps to its desktop software, an add-on model that may extend to its mobile strategy. The music service will soon allow users to add to their player/library software apps.

Rolling Stone will be an early partner, with an app that adds editorial content to the Spotify player and offers music recommendations. Also highlighted in the rollout are apps from Billboard that will include its famous music sales charts and last.fm, an Internet radio service.

Apps such as TuneWiki will supply the lyrics to songs the listener has playing, and a Moodagent app will help choose tracks according to your state of mind.

The Spotify software has not updated yet to include the new app feature. But the site is introducing the concept of apps to members. According to Spotify, the members will be able to access the app library from within the software to choose from add-ons that any Web developer can build.

At a press conference in New York on Wednesday, Spotify CEO Daniel Ek said that the app will be built from HTML5 code and will be available to both free and paid premium members.

The next logical step for the app model in Spotify is to mobilize it either as add-ons that accompany the Spotify service onto smartphones or as Spotify-powered co-branded apps. Ek said that if the desktop apps proved popular, the company would implement them on mobile platforms.

The app model creates an interesting new entry-point for marketers and media brands to integrate into the music listening experiences Spotify is driving. After great popularity overseas, the music service launched to much fanfare in the U.S. during the summer.

The service blends a user’s existing library of tracks stored locally on the PC with millions of tracks available for addition to playlists in the Spotify catalog. Music labels and artists are paid a small amount for each playback. The company has come under fire for the low rate of return many music companies claim to see from the model. Some artists have removed themselves from the catalog in recent months. Ek and Spotify counter that the model is an answer to music piracy.

Ek claims Spotify has paid $150 million to labels so far, second only to iTunes in the digital revenue it generates for the industry.