The Ball's In Macy's Court On MSLO 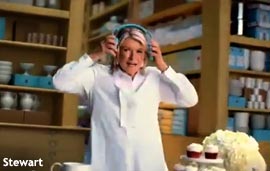 It's a match made in the Hamptons, complete with some very nicely designed, yet easy-to-make tea cozies. But it isn't with Macy's.

J.C. Penney and Martha Stewart Living Omnimedia (MSLO) are tying a 10-year knot for a branded retail experience. Not surprisingly, Macy's -- with whom Martha Stewart has had a five-year relationship around the Martha Stewart Collection-branded merchandise in stores and Stewart herself starring in Macy's ads -- is putting the partnership "under review."

Meanwhile, the Martha Stewart store-within-stores inside most of the Plano, Tex.-based retail chain's 1,100 outlets are to be open in early 2013, selling merchandise that -- according to the companies -- will have been designed and curated by Martha Stewart and her associates. J. C. Penney will market and source the products, per the companies.

Also on tap is a joint e-commerce site also set for a 2013 launch that has the in-store merchandise, Martha Stewart content, and merchandise designed or selected by Martha Stewart that is not in the J.C. Penney spaces. Martha Stewart Living gets $200 million from J. C. Penney over the initial 10-year contract period, per a joint statement.

As part of the arrangement, J. C. Penney paid $38.5 million for a 16.6% stake in MSLO, which also gives the retailer a voice on MSLO’s board of directors. And MSLO says it will pay a "special dividend" of 25 cents per share to shareholders this month.

Struggling MSLO had hired Blackstone Advisory back in May to find a suitor, prior to Stewart rejoining the board after the end of a five-year ban on her taking such a role, imposed by the Securities and Exchange Commission in 2006. Paul, Weiss, Rifkind, Wharton & Garrison LLP served as MSLO's legal advisor for the deal, while J. C. Penney’s financial advisor was Peter J. Solomon Co. and its legal advisor was New York corporate law mega-firm Skadden, Arps, et. al.

Ron Johnson, CEO of the retailer, said J.C. Penney's investment in MSLO will allow the company "to share in the upside of the work we do together both as an investor and as a retail partner."

Lisa Gersh, president and COO of MSLO, said in a statement that the alliance strengthens its balance sheet, "enhances the reach of our brands," and expands the company's merchandising and media presence. "We believe this alliance is an important step in positioning our company for the future. J.C. Penney also recognizes the powerful cross-promotional value and reach this alliance represents in light of our magazine, digital and broadcast properties," she said.

Here's what Macy's said, in its own statement: “In light of the proliferation of Martha Stewart-branded product in the marketplace, Macy’s is reviewing the Martha Stewart products sold at Macy’s for potential changes in the future. No decisions have been made at this time.”