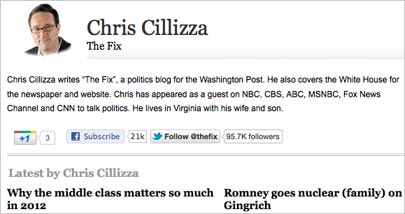 Facebook began rolling out a version of its “Subscribe” button for Web sites, allowing visitors to get public status updates from a site’s writers and contributors. The social network introduced the Subscribe feature for Facebook profile pages in September, letting users see public posts from other members without having to “friend” them.

People subscribing to Facebook accounts on third-party sites will see updates in their news feed, just like when subscribing to someone’s profile on Facebook. When someone hits the Subscribe button on a site, that action is also shared, allowing others to subscribe directly, via the news feed stories, and encourage viral distribution, per Facebook’s developer blog today.

Facebook announced Wednesday that it would bring the Subscribe button to outside sites at the Le Web conference in Paris, but did not say it would be available Thursday. For Web publishers, the latest plug-in from Facebook is yet another way to try to boost engagement with their sites and content by harnessing the stickiness and size of the world’s largest social network.

More than 7 million apps and sites are already integrated with Facebook, via the ubiquitous “Like” and “Recommend” buttons, among other features. The Subscribe button is Facebook’s closest equivalent to “following” someone on Twitter, so it will not be surprising to see it pop up next to the Twitter button increasingly on sites.

Among the initial group of sites where the new Subscribe button has already gone live are Absolute Radio, The Daily Beast, The Washington Post, The Huffington Post, Today.com and Time.com. WaPo, for instance, is using the button to allow people to subscribe to public Facebook posts from political writers Chris Cillizza and Jonathan Capehart and advice columnist Carolyn Hax.

At the end of November, the app had surpassed 3.5 million subscribers. The Post already lets readers sign up for updates from its Facebook page through a button at the top of the washingtonpost.com home page.