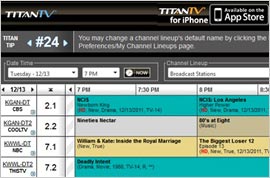 In a sign of how online video viewing is gaining a certain parity with linear TV, listings service TitanTV.com is linking with a service that points people to instant Web viewing options.

The deal is between Titan’s owner Broadcast Interactive Media and Yidio, which offers point-and-click direction for online viewing. The Titan and Yidio.com platforms have synced with an API that should allow a person at once to scan what’s on traditional TV (and move to a DVR) or fire up VOD right away.

Yidio (short for Your Internet Video) says its directory site gets more than 10 million visitors a month. Its aggregation engine can lead a visitor to multiple options to access an episode from free ad-supported streams on a network Web site to an iTunes purchase.

TitanTV listings are used on Web sites for hundreds of TV stations, offering visitors extensive listings of the programming for that particular outlet.

“As television technology evolves, we are challenged to develop better methods for delivering program information that helps viewers not only decide what they will watch, but also guide how they will watch it,” stated BIM’s senior vice president Mick Rinehart. “BIM is able to leverage our global program library and TitanTV database of local TV listings."

Three-year-old Yidio is private, and says its site “is the largest provider of new users” to Hulu, Amazon, iTunes, and Netflix.