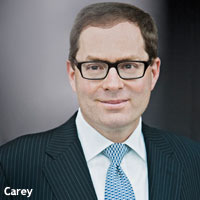 For the first time, Hearst’s U.S. digital media business achieved solid profitability in 2011, per Hearst President David Carey in a yearly wrap-up sent to employees on Tuesday. He reiterated the company’s 2012 goal of over 1 million monthly paid digital subscribers.

Over the past 18 months, Carey said the company nearly doubled in size thanks to “organic growth, new products and acquisitions.”

“Our efforts have resulted in a broadly diversified business,” Carey explained. “Today, roughly 40% of our revenues are U.S. print and digital, 40% international print and digital, and 20% are services (iCrossing and CDS Global).”

In the rapidly growing e-reader space, Hearst is currently selling more than 400,000 digital editions every month, according to Carey, while more than 40 of the company’s book titles are in e-format.

A number of Hearst titles will introduce fresh designs and re-imagined editorial formats -- starting with a new look and increased trim size for Harper’s Bazaar next month.

In addition, Hearst plans to invest in emerging e-commerce initiatives, and is looking forward to the upcoming launch of two branded YouTube channels, according to Carey.

Also of note, Carey said he expects Hearst to fast-track the transition to HTML5 for all of its Web sites, which should allow for a better user experience on mobile devices.

More broadly, while acknowledging economic uncertainties, Carey guaranteed Hearst’s growth and success in 2012 -- “irrespective of the Dow, the euro or the professional pundits."

Carey said: “Our goals for 2012 are clear: create new opportunities independent of the macroeconomic trends, further diversify our established businesses, streamline our processes and operations, and empower our people.”