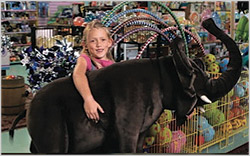 While plenty of marketers have one or two signature dishes they prepare really well — heartwarming TV campaigns, for example, or engaging digital display — American Express has turned itself into an online test kitchen in overdrive. At any given moment, the financial services company has more bubbling on its new-media stoves than all the chefs cooking on reality TV.

“Whether you think of AmEx as a service company, a payment solutions provider, or a travel service, the company is superb at marketing,” says Christina Smith, senior vice president and group director at MediaLogic, which specializes in social marketing. Among its assets, she says, are “a closed-loop business model and a loyal and affluent customer base.”

Positioned squarely at the intersection of its 94 million cardmembers and the millions of merchants that accept the card, AmEx has increasingly positioned itself as a digital middleman, coaxing both stores and shoppers deeper into the world of e-commerce. Earlier this year, it unveiled Serve, a digital payment and commerce platform meant to compete with PayPal, which allows consumers to make purchases and person-to-person (P2P) payments online, via mobile phones, and at millions of merchants who accept American Express cards. The idea is that it unifies multiple payment options into a single account, which can be funded from a bank account, debit, credit or charge card.

And working in partnership with such companies as Google, YouTube, FedEx and FourSquare, it’s created innovative programs to help its merchant base do better online. It’s also committed to investing $100 million in start-ups and companies in the digital commerce space, including everything from loyalty and rewards, mobile and online payment management.

(To be fair, some industry wags have called that massive bet a “spray and pray” tactic: AmEx is “aiming its vast resources at every buzz-laden start-up and platform it can see on the technological scene and praying that one of its bets will shape up to be a real winner in the mass market,” wrote VentureBeat, adding that the company’s biggest problem is “suiting up for the digital  revolution.”)

Certainly, AmEx doesn’t see it that way, and says its efforts to think beyond that little green card are already paying off. “Revenue growth reflected a continuing return on the investments we’re making to enhance the services we provide consumers, small businesses, merchants and corporate customers,” CEO Kenneth I. Chenault says in the latest earnings report. Those revenue gains, he says, “have also generated resources to invest in initiatives that bring customers and merchants more closely together as the worlds of online and offline commerce converge.”

AmEx’s biggest effort this year was Small Business Saturday, an initiative to get Americans shopping at small stores the day after Black Friday. In its second year and backed by a substantial marketing campaign, the company predicted 89 million people would venture out and shop small. Instead, more than 103 million did so. And public awareness of Small Business Saturday rose to 65 percent, compared to 37 percent in 2010, the company says in its release.

To participate, more than 500,000 small business owners leveraged promotional materials or an online tool, called YourBuzz, which aggregates conversations across such review sites as Yelp and CitySearch, and social services such as Facebook, foursquare and Twitter. And 15,000 small businesses signed up and received free Facebook advertising to promote their products and services.

Big companies got in on the small-business effort, too, with FedEx injecting an additional $1 million into this effort, handing out $25 gift certificates to 40,000 customers. Once FedEx put the offer on its Facebook page, it quadrupled its following and sold out in under an hour.

“The No. 1 need of small business, coming out of the recession, was to get more customers to their doors,” Mary Ann Reilly, senior vice president at American Express OPEN, told MediaPost in an interview earlier this year. “And we knew consumers wanted to support small business, with 93 percent of those in our research supporting the idea.”

In its first year, the effort drew plenty of accolades, including a Grand Clio, and a Clio Special Award (a new award) in the category of Facebook integrated media. But Reilly says it was also a boon in that “it was probably one of the best cross-functional things we’ve done, breaking down organizational barriers within the company.”
More broadly, MediaLogic’s Smith points out that AmEx “put a stake in the ground with rewards as virtual currency leveraging the growing role of Membership Rewards in the digital marketplace, even naming those rewards “the Social Currency.” Those points can be used in online games through a partnership with Zynga, or as payment currency, at sites like Amazon. Its “Link, Like, Love” effort, The Gift Chain promotion, and its foursquare promotion, which allows members to sync their cards with their foursquare profile, are more examples of AmEx’s constant efforts to cook up more meaningful ways to use social media.