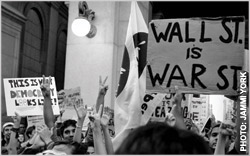 How a handful of nameless anarchists morphed into the media’s most untamed beast.

Every now and then a movement has so much viral firepower behind it that it can become personified. And in the case of Occupy Wall Street, the protest didn’t just become a megastory. It became a metastory.

Of course, Occupy Wall Street isn’t a person. But in the way that one person can rise above the noise each year in the media business, OWS has also risen above the noise while also being the noise.

By now, everyone knows how it happened. Spawned by Adbusters, an obscure journal  for “culture jammers” and beloved by anarchists, the Occupy Wall Street Movement started out as an unformed protest in New York City, and soon spread to more than 1,500 cities around the world. From the beginning, it defied expectations of what it is, and is still stumping reporters trying to cover it.

The Occupy Movement has become about the issues, but also about the movement itself. Because it lacks clear leadership it’s a story that’s been defined to some degree by the media coverage. It’s sort of like a feedback loop — one end feeds the other. And, like a viral video you can’t stop watching, sending or sharing, Occupy Wall Street shows no signs of letting up. Whether you agree or disagree with any of its points or tactics, it’s vaulted the “We are the 99%” message to the center of the global stage.

“This is the way protests will be done in the future, self-organizing, de-centered, not even tied to a specific geographic place, never mind a highly focused idea or issue,” says David Bloom, a media consultant focused on the intersection of tech, entertainment and politics.

In fact, that fuzziness has meant Occupy Wall Street has touched nearly every aspect of media this fall, from advertising to news to social buzz. It’s a movement that’s been fueled by social media, defined at times by journalistic media, and has impacted ad possibilities online. But while the movement has fed the content beast at Web publishers, most have missed the boat in using paid search to drive traffic, says comScore in a recent blog post. Searches for Occupy Wall Street drove 1.6 million visits to Web sites in the first three weeks of October. But few publishers have capitalized on this interest with paid search. More than 99% of the 1.6 million search click-throughs are occurring for organic search links rather than paid ones, comScore reports.

This underscores some of the general confusion in the advertising media surrounding the protests.

The protests have become a media phenomena not only because the protests are a legitimate news story, but because it’s a highly complicated one to cover. “There are stories that either try to portray the protestors as saints or ne’er-do-wells, but neither is correct,” Stephen Buckley, dean of faculty at The Poynter Institute and former managing editor for the St. Petersburg Times. “It is not black and white, and it is not a straightforward narrative.”

The lack of leadership in the Occupy movement — though deliberate — adds another disconnect in the media’s ability to understand and report on the protests. Occupy Wall Street boldly declares on its site that it’s a “a leaderless people powered movement for democracy…to end the monied corruption of our democracy.” But who wrote the mission statement site visitors see? The lack of answers can confound the public, not to mention the media trying to cover it.

While it’s too soon to tell what impact OWS will continue to have on politics, its effect on media is already starting to show, say Morley Winograd and Michael D. Hais, co-authors of the newly published book “Millenial Momentum,” which looks at how the young generation is remaking American politics. “Simply interviewing self-appointed leaders, accepting press releases and statements, or even observing demonstrations from afar are likely to be ineffective methods of coverage. What is likely to emerge will be greater reliance on immersion in the events as they unfold by reporters, and constant examination of the social networking tweets
and postings of movement participants.” they write in an email interview. “This will, in turn, require greater skill at analyzing and synthesizing information
from disparate sources than many reporters now possess.”