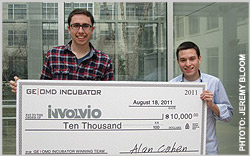 Not long ago, incubator referred to a place where tiny babies grew big and strong. Now it’s part of a corporate lexicon of “I” words — including innovation, iteration, and ideation — that refer to the hatching of cool ideas. But while most companies spend money to grow their own talent and business, OMD teamed up with client General Electric to help student entrepreneurs grow theirs.

The impetus for the GE/OMD Innovation Incubator is fairly classic: looking to tap into the swell of new digital ideas, ad agency devises program to spot, train and nurture young talent that will help keep it on the cutting edge. But the formula behind it is unique — one part nurture to two parts venture.
OMD wanted more from its incubator than an infusion of energy and potential new hires (although it got both). The agency wanted to explore new concepts, strategies and business models that could shape its clients’ media initiatives. “We’ve all had to change to get the kind of people running our businesses that are pioneer types of people,” says Alan Cohen, CEO of OMD USA. “Clients are changing, too. When you have this much money at stake, everyone is involved.”
So last spring, Cohen approached GE with the idea of hosting a digital-media start-up lab for students with innovative business ideas. The students would spend 10 weeks of the summer at OMD headquarters in New York, developing their businesses with input from OMD and GE staff. All would receive stipends, but one would walk away with a $10,000 prize to be used for either education or seed money.

“It was something in the wheelhouse of a lot of companies we work for,” says Cohen, “but GE stands for innovation. We thought maybe there would be some sort of passion.”

It took GE about one second to sign on, according to Linda Boff, global director, marketing communications. “It was an instant yes. GE is really interested in the entrepreneurial start-up space. Our only question was, ‘Can we pull this off?’ OMD gets all the credit; they went into overdrive.”

With only a few months to get the program together, the agency started lining up speakers from its own ranks and from GE. But it also reached out to a range of outside companies, from Pepsi to Pandora to Foodspotting, the foodie social-media platform, as well as a handful of venture capital firms. “We wanted to give the students exposure to people who had real hands-on experience in the world of entrepreneurship,” says Boff. That meant exposing them to how brands think of entrepreneurism, and what agencies think when they’re evaluating new media opportunities.

At the same time, OMD began reviewing students from leading business and undergraduate programs around the country. From a pool of nearly 200 applicants, the agency came back to GE with fewer than 20 candidates, according to Boff, and together, they chose the final 12 students for the program.

Some came with start-up ideas; others developed them quickly once the program began. Between them, the students worked in teams on six different new-business ventures, including Socrative, a smart student-response system for teachers, Spinlister, a peer-to-peer bicycle rental marketplace, and Broodr, an Etsy-like marketplace for unique products. At the end of August, the student teams had a final “pitch-out” in front of eight judges from OMD and GE, who sat in a “U” with score sheets in hand. “We peppered them with questions,” says Boff. “We evaluated the quality of the idea, the presentation, and the quality of the leadership.”
“It was almost like a reality show on our floor,” Cohen says. “They all had business plans and lawyers and things.”

In the end, a 21-year-old Drexel senior named Ari Winkleman walked off with the prize money for Involvio, a social platform for colleges that allows users to post and promote all events and meetings taking place on campus. Winkleman and his team had almost finished the prototype for Involvio when he applied to the Innovation Incubator; by the end of the program, they had developed a beta. A month or so later, they secured additional capital, according to Cohen, and in November, the site launched at campuses around the country, including Drexel, Tulane, Ithaca College and Florida International University.

The Innovation Incubator paid off for OMD, too. The agency got what it was looking for: intelligence on the new world of digital entrepreneurism, creative energy and ideas, and insight into its own business. For Cohen, the greatest revelation was how seamlessly the “digital all-stars” fit into the agency’s environment.

“The biggest surprise was how much similarity there was between these students and what we’re already doing for clients,” he says. “We expected that it was the next generation, but they were the kind of people we hire all the time. Our staff was not only accepting of the students — they got engaged with these folks, and brought them to their meetings. It showed that everyone could be a star.”