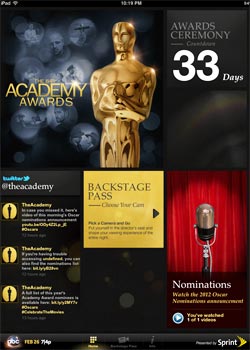 With the nominations announced on Tuesday, Oscar Awards season formally begins. And so too does ABC’s now-annual attempt to leverage multimedia enhanced experiences for the show.

Last year, the Academy and Disney/ABC issued their first attempt at a true transmedia Oscar night experience. As I said at the time, the mixed results were helped by the fact that the show itself was terrible. It planted multiple cameras on the red carpet and backstage and allowed app users and Web visitors to create their own backstage experience while watching the big show.

This week, they issued the Oscars App, part two. The iPad version I have been playing with is a more evolved version of last year’s iteration. Most notably, the pre-show materials are much richer and more thoughtfully designed.

Clearly. one of the things Disney/ABC learned from last year is not to rely on people remembering they have the thing on Oscar night. They have piled on videos in a handsome floating screen of tiles. Billy Crystal fans can see some of his best moments, as well as retrospectives of Oscars past. The top-level tiles actually keep track of how many of the videos you have seen, prompting you to dig even deeper. The app now has Twitter integration, allowing the user to track current discussions.

The app has been gamified, as is the trend this season. Users can engage in predicting winners and sharing their picks on social networks.

While I will have to see it in practice, it sounds as if the designers learned a very important lesson about options overload from last year. One of my chief complaints about the Oscar experience last year via apps was that it felt like it needed too much tending. Many of the backstage live cams were empty, and you often felt obliged to manage the many streams and chase the action backstage.

All this is really a distraction from the main show. This year, they are promising two options for use: a Watch mode and Direct mode. The former seems to be more of a lean-back experience where ABC helps direct your backstage attention. The latter mode gives the user full control over their view.

Trying a two-mode option sounds like a good idea, and it will be interesting to see how it plays out. Both in its TV division and in the film Blu-ray releases of Disney animation classics, the company has been thinking harder than just about anyone about how to modulate the second screen. The art of this will be in knowing how to enhance rather than distract -- to give people an expanded view of the programming and a way to engage socially without making them feel as if the apps are driving them.

Disney/ABC tells me that the backstage videos were far and away the most popular features among users of the app last year. But the most revealing point involves engagement. iPad users had 10 times more video views and consumed almost 4 times more page views on the tablet app than they did on the Web version of the second screen experience. Engagement appears to be the tablet platform's clear strength in the digital portfolio.