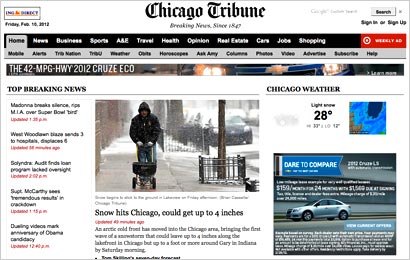 The list of major newspapers erecting online paywalls is about to expand as the Chicago Tribune formulates a strategy to charge readers for access to its online content. Editor Gerould Kern revealed the plan in remarks to the Niagara Foundation first reported by Chicago Business.

According to the trade magazine, Kern said the newspaper will begin "to charge in a selective way,” but didn’t provide more details, leaving the exact shape of the Tribune pay wall a matter of speculation. No date was set for the pay wall, either.

While details are lacking, the “selective” element could mean Tribune's paid access plan will resemble the online paywall established by The New York Times, where heavy users are asked to pay for access after reading 20 articles for free, while lighter users still get free access.

Another metro daily owned by the Tribune Co., The Baltimore Sun, began charging for online access using a model similar to the NYT paywall (with free access to 15 articles) in October of last year.

In December, another Chicago newspaper, the Chicago Sun-Times, announced that it would begin charging readers for online content with a “metered” paywall.Visitors can view up to 20 articles per month for free, after which they are asked to pay $6.99 for a monthly online subscriptions, or $77.87 for an annual online subscription.

Readers who already subscribe to Chicago Sun-Times' print version get access to online content for a reduced monthly charge of $1.99. Not long after the pay wall news, the Sun-Times and a number of other daily and weekly newspapers serving the Chicago area were acquired by Wrapports LLC.

Squeezed by declining ad and circulation revenues, other metro dailies are also introducing pay walls. In October, The Boston Globe unveiled a new system requiring readers to pay $3.99 per week for access; as with most (but not all) other online pay walls, home delivery subscribers do not have to pay extra for Web content.