Anti-depression prescription advertising has become a major DTC category with brands such as Cymbalta, Abilify, Pristiq and Seroquel numbering among the top 15 mega-budget brands in 2011. While these are clearly major national brands, our mission is to explore whether there are regional differences that might present the marketer with opportunities to optimize ad spend beyond the national blanket campaign. It stands to reason that this might be true. Not only are there differences in states’ insurance formularies that control drug reimbursement, but the actual incidence of the illnesses and treatments varies by geography.

Our first step in looking into the geography of Depression was to see where the condition was most prevalent. 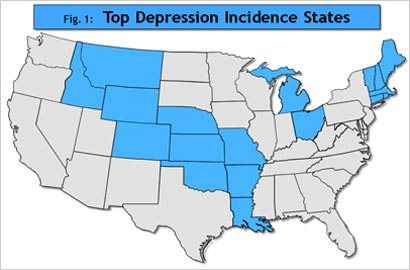 The map in fig.1 shows the top 10 MRI regions of the country. The most Depression-suffering spots were New England, Ohio/Michigan, and the swath of real estate running south-southeast from Montana/Idaho all the way to Louisiana. Depression in these regions ran from 15 to 40% higher than the national average. It represents about 28% of branded Depression prescriptions sales. Unfortunately, the use of branded prescriptions in this area was lower than the incidence itself. These areas were very high in the usage of generic prescription treatments. It’s a case of mismatched incidence and branded treatment.

The next place we looked was where the people are: the major states of New York, California, Texas, Illinois and Florida. These five states represent about 37% of the population, but only 30% of branded Depression remedies. They are underperformers in Depression incidence, Branded pharmaceutical use and Generic pharmaceutical use as well. They are too big to ignore, but they don’t stand out as optimal ROI geographies.

There is another group of areas we looked at that were more of the same as the “big state” group with the distinction of not having the raw size. This geography included such disparate areas as New Jersey, Washington/Oregon and the desert Southwest. They had low Depression incidence, low branded pharmaceutical usage and low generic usage as well. They account for about 16% of pharmaceutical sales.

Finally, in the last quartile, we found our target. 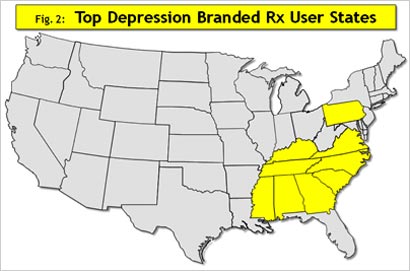 See fig.2. Pennsylvania and the Southeast. These states contain about 20% of the people, but account for over 26% of Branded Depression medication users. While as a group these states are pretty average in condition occurrence, they are way over average in Branded pharmaceutical usage, up to 44% higher usage than occurrence. They are also under average in generic usage. These are high value target areas not only because they contain an outsized share of pharmaceutical Brand users, but equally important, they are far more likely to treat the condition medically and to do so with Branded pharmaceuticals. These are by far your best prospects.

Consider this: Set aside 15% of your national plan budget and allocate it to spot TV in your high ROI market areas. A dollar spent in these predisposed Branded pharmaceutical markets will return a better return on your ad budget and better sales for the Depression treatment brand.