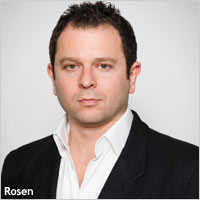 Daniel Rosen, who formerly led AKQA’s mobile practice, has jumped to WPP mobile agency Joule as CEO of its EMEA (Europe, Middle East and Africa) division, reporting to Joule CEO Michael Collins. He will also serve as a member of the agency’s global management team.

Rosen is the second high-profile executive Joule has brought on in the last two months as it expands its presence globally.

In January, it hired Jonathan Tom, previously group marketing manager for Microsoft’s mobile advertising business, as VP, media for EMEA. In the same month, it opened a Paris office under former Motricity executive Ludovic Chayrigues to broaden its footprint in France.

Most recently, Joule announced its expansion into China through a joint venture with GroupM China and its acquisition of Beijing-based mobile agency Wisereach. Headquartered in New York, Joule also operates offices in Los Angeles, London, Sydney and Melbourne. Rosen, who has been based in London at AKQA, will join Joule’s office there.

Collins stated that Rosen was "one of the world’s leading mobile marketing experts," noting that his "experience and leadership will play a crucial role in Joule’s continued growth in EMEA."

The mobile division Rosen founded at AKQA six years ago was recently named by Forrester as one of four leading mobile practices among digital agencies, along with SapientNitro, Ogilvy and TribalDDB. The agency was cited as a strong choice for any brand “looking to make a big splash in mobile,” but the study said the agency could improve its marketing skills and tactics.

At AKQA, Rosen worked on mobile campaigns for brands including Nike, Gap, Coca-Cola, Heineken, Volkswagen, and Visa. He currently sits on the Interactive Advertising Bureau’s Mobile Leadership Council and the Digital Council of the Institute of Direct and Digital Marketing in the U.K.

Previously, Rosen was managing director for Associated Newspapers/Lagardere’s interactive division, where he launched mobile initiatives for companies including Emap, The Daily Mail and GSK. Rosen began his mobile career as a client-side marketer at Orange U.K.

Collins declined to comment on what, if any, clients might move with Rosen to Joule. But more moves may be ahead for Joule in the region that Rosen will head. “We are actively exploring opportunities to expand to additional European markets,” said Collins.