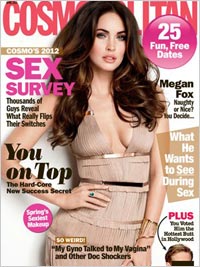 Cosmopolitan, long one of the best-selling magazines at print newsstands, is also taking the digital world by storm, according to publisher Hearst Magazines, which said the saucy women’s lifestyle title is the first Hearst pub to attract over 100,000 digital subscribers.

The digital edition, which is available on the Apple, Zinio, Barnes & Noble and Amazon Kindle newsstands, was one of the first big consumer mags to launch in the medium. Its Zinio product debuted in 2005. Now Cosmo is just one of a number of Hearst titles hawking digital editions. Hearst Magazines president David Carey stated: ”Hearst Magazines has sold more than 500,000 digital subscriptions across its portfolio to date and expects to reach 1 million by the end of 2012.”

Indeed, Hearst expects even stronger sales in the future as the tablet market expands. Chris Wilkes, vice president, Hearst App Lab, stated: “There is a significant amount of potential for this paid-to-consumer, digital business," noting that it offers "the ability to create low-cost, experimental products like “Cosmo for Guys,” a digital-only brand extension.

Hearst has made a number of moves to bolster its digital ad creation and distribution capabilities, especially for mobile. Earlier this week, the company announced a partnership with Sprout, which will create HTML5 ad units for brand advertisers to run on mobile-optimized Web sites. Sprout’s platform allows clients to create, manage and optimize display advertising for devices, including smartphones, tablets, game platforms and TVs.

Funny Or Die Launches “The Occasional”

Funny Or Die, the Web site co-founded by comedians Will Ferrell and Adam McKay in 2007, is launching a digital magazine for the iPad called “The Occasional,” featuring original content, interviews, multimedia, games, political commentary, movie reviews and comedic twists on conventional magazine themes like “Who Wore it Better,” among other interactive components.

The first issue, now available on Newsstand on the App Store, includes 25 pieces of original content, including a children's audio book “Who's Hollering for Harry,” with sound effects by Marc Maron. Dick Glover, CEO of Funny Or Die, explained: “Comedy comes in different shapes and sizes, and through this medium our creative team came up with truly innovative content that is a great addition to the Funny Or Die universe.”  Readers can purchase a per-issue subscription for $1.99, delivering six bimonthly issues, or an annual subscription for $9.99.

Self Gets Into Social Gaming

Women’s active lifestyle title Self is jumping into the social gaming pool with a new digital feature called Self Workout in the Park. Inspired by the magazine’s live-event franchise of the same name, the game combines virtual gameplay with real-world pursuits: Players are invited to create and customize their own outdoor fitness park, personalize avatars in their likeness, engage in health and relaxation activities, work out on fitness equipment and participate in exercise and health-themed missions and challenges that impact the look and fitness level of their avatar. The game will premiere on Facebook on March 19, 2012; more information is available at the game's official site: SelfWorkoutinthePark.com.

Bill Carter has been named president and CEO of American Legal Media. He replaces William Pollak, who is leaving the company. Carter previously served as senior vice president of the Small Law Business Unit at Thomson Reuters. He has also worked in senior positions for LexisNexis, Epiq Systems, and GES Exposition Services.