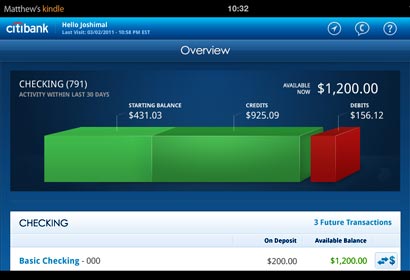 Claiming to be the first banking app designed expressly for on the Kindle Fire platform specs and interface, Citibank debuted its special edition app for the bookseller’s tablet. The app gives Citi customers access to their accounts and visualizes the figures in bar graphs and other types of charts. Citi says it designed and formatted the app to work well within the half-sized tablet dimensions (or is that double-sized smartphone?) of the Fire's seven-inch touchscreen.

Citi has banking apps in the iPhone, iPad and Android smartphone stores. In the Apple App Store it is currently ranked as the eighth-most-downloaded Finance app. This is the first time Citi has ventured onto the Android tablets, however.

Citi says it has modified display content, button sizes, resolution and other aspects of the interface to the specific requirements of the Kindle Fire device. Perhaps reflecting the conventional wisdom that Kindle Fire’s audience may skew more female than the iPad’s more male-oriented audience, Citi calls out its inclusion in this edition of content from Women & Co. This Citibank service offers financial and career information aimed at women.

Citi’s move appears to acknowledge that the Fire has become one of the only credible rivals to the Apple iPad in the tablet market. Recent reports from the ad-serving ecosystem suggest that traffic from the Fire is already outpacing any other Android-based device. Mobile ad network JumpTap claimed recently that in January about a third of the ad traffic it was seeing from tablets came from the Kindle Fire. Barclay’s analyst Anthony DiClemente recently estimated that Amazon sold 5 million Fire units by the end of 2011 -- the first six weeks it was in market.

Banks appear to view mobile apps and services as a way to differentiate and compete with rivals over convenience features. Citi also introduced this week mobile check deposit, which enables customers to take an image of their signed check via the Citi Mobile apps to deposit it to their account. A new PopMoney features allows the app user to transfer money directly to an authorized payee on Citibank Online.