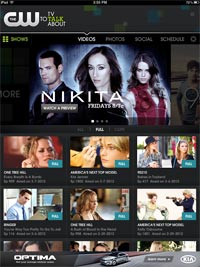 I think those of us above the age of 35 (and those of us way past 35) can be forgiven for not even knowing that something called "The Secret Circle" is a TV show…or "Supernatural"…or "Hart of Dixie?" Or did you know that Buffy is back on series TV, and she has a twin sister?

Yeah, yeah -- I am so ancient I think I am double the target demo for the CW. If I knew what "Gossip Girl" was about, it might risk my relationship with my 20 year-old daughter. I learned long ago that you get a lot more mileage with your kids if you play the role of adorably clueless oldster rather than struggling-to-be-hip cool dad.

But The CW’s new streaming media apps for the major mobile operating systems did get my notice. The network has committed to having its previous night’s prime-time series available in full on these apps by 6 a.m. the following morning. The episodes will also be ready at the same time at the CWTV.com site.

The app tries to incorporate the social sharing tools one would expect from something aimed at the younger demo. All videos and images can be shared via Facebook, Twitter and email.

I was struck by the ease of use and clean functionality of the app. Screens wipe in and out elegantly. The wall of show thumbnails click into the episodes, galleries and live feeds from the social nets related to the program.

This is all well and good. But to be frank, while the interface is a joy to use, this does not meet the higher bar of functionality we see in the standard-bearer for network-streaming apps. In order for these apps to feel personal, they need to reward the loyal viewer by customizing the experience. If someone is enough of a core viewer to download the app, shouldn’t they be able to create a playlist for later review? Shouldn’t the app let them set alert reminders for watching the live show? Shouldn’t the app know where you left off watching the time-shifted episode from session to session? None of that is apparent here.

Two years ago when ABC launched its app in tandem with the iPad’s launch, a straightforward streaming media app seemed wondrous if only because it let us see a full episode anytime, anywhere. I think we are way beyond that now. The CW app, like too many network TV DVR-like apps, needs to get past thinking we should be dazzled by time-shifting alone. I may be too old for these programs, but I am young enough still to be impatient for the next stage.