Smartphones Are Crushing Camera Market, So Why Aren't Marketers Noticing? 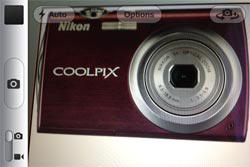 None of this is rocket science. According to a report last week from Bloomberg, smartphones are not just slowing the growth of digital cameras or shaving off the edges of the low-end market. The quality and ubiquity of smartphone photography is beginning to eat away at the traditional camera market. I am wondering when marketers will make more of this.

Digital camera shipments may fall 4.3% this year, and it isn’t just the low end that is hurting. Major players like Nikon and Canon, who make some devilishly good point-and-shoot devices, will feel it. In January, Nikon, Canon, Sony and Olympus together shipped 10% fewer units than the same month last year. And we all know what is happening to Eastman Kodak.

There seem to be a couple of lessons in this for us all. First, the shift to smartphones as a primary camera is only in part based on convenience. I suggest that digital cameras, which are notoriously overcomplicated, way overshot the market in the competition for feature sets. Most people really didn’t want to have to deal with the arcane menu systems that are even found on many point-and-shoot cameras. Most smartphone cams actually make good on the point and shoot for the simplicity the digital camera makers said they targeted.

But that leaves me puzzled about the relative absence of this smartphone feature in mobile marketing. Almost every metric we have seen over the years for both smartphone and feature phone use shows that taking and sharing images are among the most used features on a phone. But so few mobile marketing campaigns try to engage the user with this very familiar aspect of the device they already love to use.

The possibilities are as endless as they are obvious. Many years ago, one of the earliest signature mobile campaigns for a major auto manufacturer recruited users to snap photos that spotted a brand new car model in the wild. It was done before there was a lot of scale to mobile marketing, but the concept was ingenious.

Hasn’t Instagram demonstrated how much people want their creativity engaged in simple, easy-to-implement ways? Where are the campaigns that ask people to snap, edit and send their best version of a billboard or print ad? Let the user complete the ad or become a Mad Man him or herself and compete for the best smartphone-modified version of an ad.

I know we have seen some experiments along these lines in the past, but the relative absence of leveraging the phone cam in campaigns speaks to how much mobile marketing continues to think of this medium as a mere extension of the Web. Consumers have in their hands the most powerful multimedia making tool imaginable. Image, video, voice are all so fully integrated with text and Web and app browsing that few of these consumers need to be tutored in how to make it work. They already love what these phones can do.

Let’s stop advertising so much, since we already know consumers either dislike or just don’t see much of that. Instead, let’s look at the device at hand and in hand to craft a new marketing model that engages what people already show passion about doing.