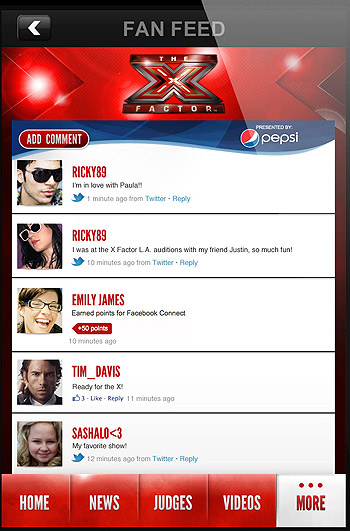 The X Factor, Fox and SYCOTV created a series of interactive pieces for the U.S. debut of The X Factor, but the most innovative piece of the campaign emerged in four mobile apps that gave fans exclusive access to content on demand, multiple backstage camera views of the show, and allowed them to vote through an image-based SMS voting application. During the show, the apps provided a companion broadcast serving up to 100 complimentary pieces of original content, including backstage photos, exclusive news scoops, insider access to the making of the performance, and live broadcast where correspondents commented on the show, creating a broadcast within a broadcast.