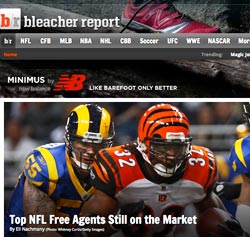 Determined to deepen sports fans’ affinity for the Web, publishers are putting ever greater emphasis on personalized content.

On Thursday, for instance, Bleacher Report plans to unveil a new home page that can be tailored to individual users’ athletic leanings and team allegiances. The redesigned site will also incorporate Bleacher Report’s “Team Stream” service, which presents team-specific content in real-time.

“We’re doubling down on our coverage of teams, which has become a central way that fans follow sports,” said David Finocchio, co-founder and vice president of content and product at Bleacher Report. The goal is to make Bleacher Report’s home page “the starting point for fans that want to check in on their team as well as the national sports storylines.”

In February, Bleacher Report said it attracted about 8.5 million unique visitors -- up 15% year-over-year.

Still, consumers’ continued embrace of the Web spells opportunity for Web properties large and small. Across Europe, the Web recently surpassed TV as the primary platform for 18-to-35 viewers to watch their favorite sport, according to Havas Sport & Entertainment.

Similar to Bleacher Report’s existing Team Stream App -- available on iPhone, iPad and Android devices -- the new Team Stream section of the home page will offer up-to-the-minute news from staff writers, as well as aggregated from other sources.

The new home page will also feature a social module with the trending topics on social media, which will encourage visitors to share content with friends. As part of its “Lineup” section, the site will feature top national sports stories and updated clips.