Is Your Social Media Investment Going Down The Sh*tter? 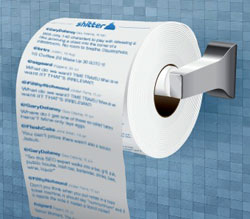 Forgive me for thinking that maybe April Fool’s Day came a week early, but, hey, when you wake up first thing in the morning and read that there’s a startup called Sh*tter, that will print your tweets on a roll of toilet paper, it’s to be understood.

And, wow, what a metaphor!

The company actually helps guide you to the deeper meaning, if you didn’t get it immediately. Its tagline is “Social media has never been so disposable.” However, the flaw I see in the business model is that -- well, certainly, this is true in my case -- my tweets are genius. Does a tweet as compelling as this one, from Mar. 14, deserve to die a slow, but biodegradable, death in the Westchester County sewer system? “It took several years, but I've finally gone thru all 5000 sheets of white letter size paper for my printer. Off to #staples we go.”

(However, in case you were wondering, the strategic use of the #staples hashtag did not result in the hoped-for tweet from Staples with a link to a coupon.)

No, the much stronger business model for the people at Sh*tter would lie in printing other people’s tweets on toilet paper, like the people you really want to unfollow, but just haven’t gotten around to. There’s also a huge market in toilet paper printed with the status updates of people who are a little too prolific when it comes to detailing their life, but that’s a ponder for another day.

All of which leads me to today’s important business question: Is it good that WPP said it will be doubling its spend on Facebook this year?

The admission came in remarks that CEO Martin Sorrell made at the 4As “Transformation” conference in Los Angeles this week. In raw numbers, that will mean an increase from about $200 million to $400 million. That’s still a small percentage, also per Sorrell, compared to what WPP spends with Google ($2 billion), and News Corp. ($5 billion). Still, when one considers that Facebook’s revenue last year, according to its S1, was $3.7 billion, the WPP-o-meter would put its projected 2012 revenue at $7.4 billion. In other words, if everyone doubled what they spend on Facebook, that’s where the company would end up by the end of the year.

But Sorrell also appears to have made the case for how all of this social media advertising could end up in the -- yes! -- sh*tter. And that’s if Facebook -- and its social advertising competitors -- don’t do a better job of nailing down the pink slime that is social media ROI.  “The area is a very sexy area, and clients have gone in almost willy-nilly, because it is fashionable to do so,” Sorrell said. “The investments have reached a scale where procurement departments, finance departments are increasingly looking at those investments.”

As I’ve said before, Google has this much easier, at least in its search business. See ad. Click on ad. Procure payment from advertiser.

Maybe it’s uncharitable for me to compare social media ROI to search ROI, but, even if it’s not pink, you have to admit it is pretty slippery. For one, it defies easy definition: Is it about wracking up Facebook “Likes” or Twitter followers? Is it about tracking social media advertising down to the point of sale, or lifts in brand awareness or favorability? Is it click-throughs? What the hell is it?

The challenge for Facebook then, and its competitors, is to offer a depth and breadth of metrics that can apply to any and all of the above. It also requires a certain amount of discipline from advertisers, who will need to decide -- here’s the extension of the sex metaphor you’ve been waiting for -- why they got in bed with social media in the first place.

That’s why, while we can expect Facebook’s growth to double -- or just about -- in the near-term, the long-term presents the bigger challenge.  When one combines the many different forms, and potential goals, of social advertising -- from paid ads that lead to commerce to social videos whose main objective is reach -- ROI becomes a difficult thing to get a grip on.

In case you were wondering, the "twoilet" paper referenced above goes for $35 for four rolls. Mashable estimates that at 75 sheets per roll, the cost of each individual sheet is 8.5 cents. It’s up to you to decide whether that’s good ROI.

social media
1 comment about "Is Your Social Media Investment Going Down The Sh*tter?".
Check to receive email when comments are posted.
Next story loading