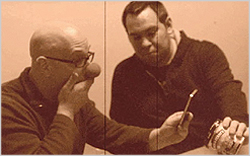 What did you learn from this experience?

Adam: No matter what people in agencies say they are going to do, it doesn’t mean they are going to do it [laughs]. Seriously, we had hoped more agencies would want to contribute their ideas and screens experiences. I think that the whole collaborative effort is very difficult. It’s great in theory. But people are busy and don’t necessarily have the time. But I’m very happy with the contributors that we had. It was also fun to just talk to people about this as we were gathering ideas. I think it’s the agencies that are really getting themselves out there and getting new business that are the ones who get to try new things. The ones who submitted these ideas are the ones who are winning big awards, too.

John: It’s a commitment to innovation.

Given what you know now, what would you do differently?

John: Hire writers! It’s been a long time since I’ve written that many words, so it was a challenge.

What do you think about the future of print as a medium not just for ads, but for idea expression?

Adam: When you look at the numbers over the last five years, one could probably argue that in a sense, print is relatively dead. We’re seeing a shift away from traditional magazines. I don’t think there will ever be a point where the print magazine totally doesn’t exist, at least in my lifetime. I just think it may be three pages with interactions. People still like analog assets. They still like things they can touch and memories they can put on their walls. The role will just become more of an activation for other experiences.

John: Print has a place in solving the out-of-sight, out-of-mind casual engagement of reading solution, until we reach the point where screens are embedded and convenient in every surface. We haven’t replaced, nor will we replace, sticky notes and white boards for a while, because we simply don’t have cost-effective solutions. When we can project onto coffee tables and whatnot without having to worry about cords, that’s when it will change. What people are missing with digital is the presence of contents in their surroundings. We’re getting there. But it’s just not in our environment in the same degree, and at the low cost, that print can be.

Well, can’t you say that print is more valuable than digital? It costs more money to print magazines and newspapers. Paper gives stories weight. How will you be able to distinguish the good from the bad if everything goes online?

Adam: Isn’t that just a perception from how you approach things online? If you are 10 years old now, you may not have that idea that premium value is placed on the printed word and online may have less of a premium. There is a premium element to the printed word on paper for the time being, but I think it’s a conditional thing — something we’ve been taught. I’m sure a new generation will learn differently.

I have an iPad and rarely use it. I prefer magazines and newspapers.

John: That’s interesting. There is definitely a nostalgic value. It’s interesting when you go to magazine paper, the different feels and smells. But with an iPad, when you use one device for everything, you lose that feedback. It’s always the same experience. It always feels like my iPad. I’ve completely acclimated to this. But I never read a newspaper or magazine religiously — only online.

John: QR codes are only good for deep links. A QR code is like a scratch-off. It’s a gimmick if you’re just sending someone to a URL because the practical reality is that most people can type a short URL in a shorter time. Where it gets interesting is where you’re doing dynamic printing and you want to give everyone a secret unique URL that is in code and isn’t readable, then you have to scan it. Or if you’re going to make a URL and, for some strange reason, it has to be huge and it takes too long to type, then it’s useful. Do you agree?

Adam: I do think QR codes will become obsolete within the next five years because they will be replaced by other technologies like visual recognition. Where you can just hold your phone over something and it will recognize it, or there are chips in magazines. I think the way QR codes are being used today is gimmicky.

Back to the magazine, do you have any regrets?

Adam: This was time consuming! I wasn’t necessarily prepared for the amount of time this would take. Doing it again, I would plan better from day one. We’re lucky that the MEDIA staff helped us out a lot so the book is going to be great, but a little more upfront planning would have made it more aligned with what we had envisioned upfront. We don’t have the collaborative element we wanted at the outset, but the book is still great.

John: I think that the way a lot of this operated, I was writing and looking at the entries and Adam was fielding the front-end stuff. The general theme is that the agencies’ eyes were bigger than their stomachs in terms of companies who didn’t deliver.

Last question: Would you take what you learned from this magazine — will you take any of it — to your professional life?
Adam: I’m absolutely not going to become an editor.

John: I can tell you through the process of writing the piece on television — I’ve read two different books on writing style and conveying thoughts. I used to write a fair amount, but then I became focused on production writing, so I had a hell of a time going back to this journalistic writing — explaining what I think or the history of certain things and how they equate. It was a total change. It will make my client writing more interesting. At the end of the day we found this to be an extremely influtential and positive experience.