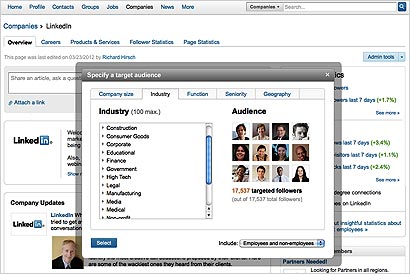 LinkedIn in February made it easier for users to follow companies on the professional networking site through a button that businesses can embed on their Web sites. Now it’s helping companies target and track their followers with a new set of software tools.

LinkedIn just introduced a service that allows businesses to tailor content sent to followers according to various criteria, including industry, seniority, job function, company size, non-company employees and geography. Those are among the same targeting categories available to third-party advertisers on LinkedIn through its self-serve ad solution.

Companies will also have direct access to an analytics dashboard showing follower engagement metrics such as likes, shares, comments, and the proportion of those interacting with targeted content. The dashboard will also provide followers’ demographic data.

The new Targeted Updates and Follower Statistics are rolling out initially with a small group of companies including AT&T, Dell, Microsoft, and Samsung Mobile before being offered more widely in the coming months. LinkedIn says it has more than 2 million companies in its network.

The new services are free to members with a LinkedIn company page and are clearly aimed at helping it compete with  Facebook and Twitter as a social marketing platform for businesses.

The company declined to say how many of its 150 million users worldwide are following companies on the site. Based on a user survey, it only says 70% “follow or would follow” companies on LinkedIn. It also released data suggesting that followers are more active than its users in general. For example, followers are twice as connected as the average LinkedIn member and have joined twice the number of LinkedIn groups.

Almost half (49%) say they are more likely to purchase products or services from a company that’s more engaged with its followers. About the same proportion (47%) say LinkedIn is a more appropriate social environment for getting company news and updates than other social sites.