What to Expect in News 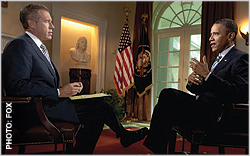 When it comes to television news, you couldn’t ask for a richer year than 2011. Between the Arab Spring, Japanese earthquake, Libyan revolution, killing of Osama bin Laden and worldwide Occupy movement, it was a bonanza of gripping, dramatic, highly visual events. (While nothing to look at, the sputtering economy and GOP debates kept the pipeline flowing, too.)

You’ve got to hand it to the major news outlets. Considering how depleted their financial and staffing resources are, they managed to cover an amazing amount of foreign ground last year — globetrotting from one crisis spot to another. The broadcast networks were rewarded for their good efforts: Ratings were up across the board for the first time in nine years.

What could be better for the shrinking sector than a single-digit rise in deliverables in 2011? How about an estimated $3 billion rise in political ad spending in 2012 — a number some people think could swell to $5 billion and beyond. Cancel the pallbearers: Television news is alive and suddenly rolling in the bucks. When the industry stops pinching itself, it can thank the U.S. Supreme Court for the advertising godsend known as the Super PAC.

It’s been two years since the High Court’s Citizens United ruling gave companies and unions carte blanche to fund nasty campaign attack ads. The ruling took place before the last midterm elections, but this is the Super PACs’ first presidential campaign season, as well as its first upfront. Whether the final amount turns out to be $3 billion, $5 billion or even $8 billion, the vast majority of the Super PAC money will go to television. (Pity the non-political advertisers who’ll be paying through the nose for the scraps.) And until or unless the ruling is repealed, television news, both broadcast and cable, can expect a major cash infusion every presidential campaign year, and a minor one for the midterm years.

“Cable news will have a strong year because they do the best job covering the conventions and the debates,” says Brad Adgate, senior vice president of research at Horizon Media. “It’s one of the few things that’s certain.”

Another sure bet: The broadcast networks are busy sorting their bonus bucks, too.

“The TV industry is building this into their budgets,” says media critic and cable-news veteran Jeff Cohen, founding director of the Park Center for Independent Media at Ithaca College and the founder of media watchdog Fairness and Accuracy in Media (FAIR). “This is part of their revenue structure. They’re counting on it.”

It’s nice that television news has something it can count on. Cable news had a mixed year in 2011 (more on that later), and while the ratings are up on the broadcast side, business is definitely not booming. Ratings leader NBC Nightly News with Brian Williams rose 3 percent in 2011 to 8.6 million viewers, and ABC World News with Diane Sawyer rose 5 percent to 7.8 million. Last-place CBS — which switched anchors and changed its focus to hard news — gained 6 percent to reach 6 million. But the big three are still down 12 percent, 18 percent and 30 percent, respectively, from 2001. Go back 20 years, and the numbers are truly devastating: NBC has lost 22 percent of its viewership; ABC, 42 percent; and CBS, 51 percent.

No matter how much money the Anonymous Corporate Friends of Romney or the Faceless Labor Leaders for Obama throw at it, the chances of broadcast news making a significant recovery are next to nil. How could it, when the nightly news airs in the early evening? Who’s home and hunkered down in front of the set at 6:30? NBC might have better luck with The NBC Lunchtime News with Brian Williams or The NBC Midnight News with Brian Williams. At least people are around then. (Williams himself has encouraged viewers to time-shift his broadcast.)

The broadcast networks are trying; they really are. They worked hard last year to differentiate themselves and provide unique content. NBC focused on the tsunami in Fukushima and the overthrow of Hosni Mubarak; ABC on soft news, interviews and features; and CBS on the economy and war in Afghanistan, according to the Tyndall Report. Will it make a difference? Probably not, says Adgate: “Things are character driven; if you like the anchor, you’re going to go to that network. It’s more important than the content.”

So much for differentiation.

The networks are fighting the good fight on all fronts: online, social and digital. But as tough as it is in the broadcast arena, the new-media world is even tougher. “I don’t think there’s a lack of effort,” says Adgate, “but once you take it to other platforms, the competition is fierce.”

“What can they do? If they make it entertainment, it’s not the news,” says Adgate. “To get late-breaking stories, [viewers] go online; [they] don’t go to network news. The obvious answer is to put it in primetime, but the networks are not going to do that.”

The fact that the networks won’t move their flagship newscasts into a better timeslot is a particular shame because they actually offer something that cable news shows can’t: expediency. People don’t have time to sit for an hour in front of the cable primetime shows to figure out what’s going on. “The newscasts are pretty good,” says Adgate. “They cover the day’s events in 22 minutes, which is an increasingly hard thing to do. It’s a very concentrated news brief, and it’s becoming the best way to get top line information.”

That might be a selling point for the over-55-year-olds the networks already have, but not necessarily for the 24-year-olds they need to attract. Younger viewers — the ones who could actually keep the networks alive after the Super PAC money is gone — want more than information, according to Cohen. They want some type of truth, which is why they turn to Comedy Central’s The Daily Show (which averaged 400,000 more viewers last year than Fox News’ entire primetime lineup — 2.3 million to 1.9 million) and The Colbert Report for their news. The fact that Jon Stewart skewers the traditional news shows makes him a more trustworthy source for younger viewers. His slant actually makes his news more honest. All that, and he’s funny, too.

In a way, it’s the same reason people watch the cable news channels. Fox goes right and MSNBC goes left, but at least they go, says Cohen. With the exception of Anderson Cooper — who refreshingly called former Egyptian president Hosni Mubarak a liar when he was, in fact, lying — CNN is so middle-of-the-road it doesn’t say much of anything to viewers who want a point of view, Cohen maintains. (The network has historically trailed the other two, but in January it rose to second-place, gaining 42 percent in the 25-54 demographic.)

“In this modern era, readers and viewers want truth vigilantes; they want things exposed,” says Cohen. “The he-said, she-said isn’t captivating. If a politician is BS-ing, they’re going to be going somewhere to find out.”

Maybe that’s what happened to Fox News. In January, the cable leader just celebrated its 10th year in first place amid great fanfare, with its stars sounding the opening bell on Wall Street. From all the hoopla, you would have never guessed Fox lost 9 percent of its total primetime viewership in 2011 — and 15 percent of the 25-54 demographic. And while CNN rose 16 percent and MSNBC gained 4 percent, together they are still half the size of Fox.

So where did all the Fox eyeballs go? Maybe they slid over to CNN or swung back to the broadcast networks. Maybe they moved on to the Internet, where they can get breaking news from any number of sources — slanted or not — that will give them a sharper, deeper picture of what’s going on, particularly overseas. For news junkies, the Internet is the only place to go for serious reporting, according to Cohen. During the Arab Spring, Al Jazeera English offered in-depth coverage using local sources. The one-hour public television show Democracy Now!(democracynow.org) still maintains a physical presence in Egypt — long after the corporate media heavyweights left town. Apparently, the independent news outlet thought the story might continue beyond the spring.

It’s impossible to know exactly how many viewers, and how many advertising dollars, have left television news for the Internet. But marketers are going there no matter what the figures are.

“It’s one of the biggest growth areas, and advertisers want to be in that space,” says Adgate. “It’s a dynamic shift. When you ask marketers, it’s always ‘social, digital.’ We’re going to spend more in the space than we did last year.”

How much more will advertisers spend? Who knows? How much were they spending online in the first place? According to some sources, online ad spending hit $31 billion last year; others say $40 billion. Forrester Research expects online spending to hit $77 billion by 2016, accounting for 35 percent of all ad spending and eclipsing television advertising. We’ll see.

So at least for now, television news has bought a little extra time to figure out how to survive and even thrive without the help of a ginormous advertiser with super-deep pockets.