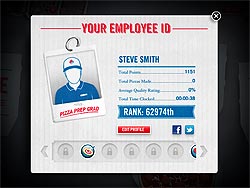 As branded apps go (badly, generally), Domino’s elaborate iPad game and ordering tool Pizza Hero is certainly better than most. As we outlined in November when it launched, the build-a-snack app walks the user through the process of making a pie from scratch: dough stretching to sauce tossing, pepperoni dealing to proper baking.

In a crafty combination of genuine play (you can compete with others via iOS Game Center) and utility, the user can eventually order a pie as well. According to its agency CP+B, which helped develop the app, more than 2.3 million pies have been made in the Pizza Hero iPad app since its November launch.

As I experienced when I first played the game, these guys really are serious about instructing you how a good pie is made. Managers are there to tell you how to improve even when you pass a level. I have this manager who is riding my ass right now about making a better crust than this. Jerk! Well -- until he tells me “this is the best saucing I’ve seen in my entire career as manager.” This is why the app works and is among those rare branded apps that actually get many strong user reviews.

And since the app makes you feel right at home as a worker at a Domino’s (even giving you an “employee ID”), it was just a small step from here to converting the app into a recruiting tool. In the latest revision to the Pizza Hero for iPad download, players need to complete Pizza Prep School and the Two Pizza Throwdown challenge and Domino’s will invite them to apply for a job.

The app had been helping to promote the Monday-Wednesday carryout deal promotion, which they now say has been so popular that the chain needs more chefs.

It is a cool integration of game play, m-commerce, brand promotion and b2b. In fact, a national TV spot is premiering now to support the effort.