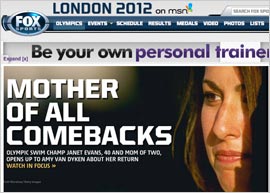 In the run-up to the Summer Olympics, networks and online publishers are not letting NBC Sports have all the fun. For the first time, FoxSports.com and MSN.com have partnered on an Olympics hub devoted entirely to the summer games in London.

The site -- featuring a selection of multimedia content, including editorial, videos, photo galleries and social integrations -- represents both properties’ most ambitious Olympics coverage to date.

The original content, supplied by a team of FoxSports.com writers, producers, and editors, will then be distributed to MSN.com and its more than 520 million global monthly visitors.

“Through our collaboration with MSN.com, we will be able to broaden the scope of our storytelling and reach an unprecedented audience,” Rick Jaffe, FoxSports.com editor in chief, said.

At launch, Scottrade has signed on as the site’s charter sponsor. Additional sponsors have yet to be named.

To support the 3,000 hours of live online video coverage it’s planning to stream, NBC Sports recently announced a partnership with technology firm FreeWheel. The online video specialist will help NBC manage and serve up ads on NBC.com, NBCSports.com and other properties.

Just this week, NBC Sports Group -- which was formed after Comcast acquired control of NBC Universal -- vowed to stream much of its Olympics coverage live. NBC said earlier this month that it had already sold over $50 million in digital ad buys for the summer Olympics.