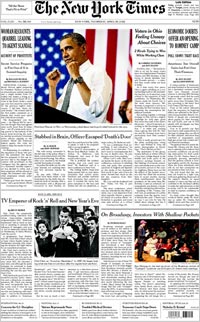 The New York Times Co.’s online paywall strategy appears to be paying off, with new circulation revenues helping staunch losses resulting from continuing declines on the ad side. But it remains unclear whether the company’s finances will eventually be able to reach a state of equilibrium.

The increase in circ revenues offset another round of advertising losses. NYTCO’s total ad revenues decreased 8.1% from $259 million to $238 million, due to a 7.2% drop in print ad revenues and a 10.3% drop in digital ad revenues, resulting mainly from weakness at NYTCO’s About Group. As a result, the company’s overall revenues were basically flat at around $500 million.

These results don’t include the Regional Media Group, a division including 16 regional newspapers that was sold for $140 million to Halifax Media Holdings on January 6, 2012.

Although digital circulation is providing a welcome source of new revenues, it’s not clear whether they will be able to mitigate future losses on the ad side. Most analysts predict that the newspaper industry as a whole will suffer more ad revenue declines in coming years; meanwhile, Barclays Capital estimated that the NYTimes.com online paywall could bring up to $100 million per year, but also warned that “the company's digital subscriber gains are difficult to sustain at the present pace and may start tapering over the course of this year.”