Episode 506: I Dream of Janie -- Or, It's Not Over Till The Vodka Bottle Sings 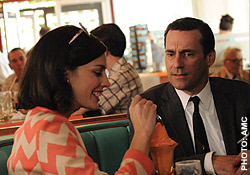 Boy, was that William Butler Yeats guy onto Matt Weiner! Yeats’ description of a world gone mad, with the beast slouching toward Bethlehem, was in answer to the near-apocalypse of World War I. In this episode, there are "Sopranos"-ish flashbacks and Tarantino-like screwings with chronology. They’re weird and jumpy but somehow work, when dealing with the dropping of beans, acid, and fecal bombs.

There are reversals of scenes and exchanges of character, all leading to the feeling of being displaced: Peggy gets taken off the Heinz account; after an acid trip reveals the truth of their ruse of a marriage, Roger says he doesn’t want to “displace” Jane from her home after their divorce; Ginsberg opens up about being a “displaced” person in an orphanage after the Holocaust, and assures Peggy that though he really is 100% Martian,  “there’s no plot to take over earth. You’re just displaced.”  Don forces Megan to go to a HoJo’s in Plattsburgh with him, displacing her from where she wants to be: at work with her team, presenting. And, by so acting on impulse, Don turns into a beast, blowing his house down, alienating himself from  the world.

Let’s start with Peggy, who’s come up with the tag line  “Home is where the Heinz is.” It’s lovely. She wants to make it elegiac, as Don did with “Carousel,” or a sacred ritual, as she did with the splitting of the Popsicle sticks. But come on, people, we’re dealing with baked beans here! 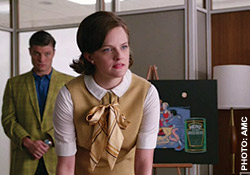 “The fire is primal,” she explains, while presenting to the client in the conference room, standing next to the drawing board that she had to go back to, repeatedly. “They come there alone, gathered in the circle, they suddenly feel included. They’re safe. It’s the beans that brought them together at the end of the summer.”

It is a bit hyperbolic and gassy. Still, had Don been there, he could have sold it to the Heinz guy, who really doesn’t know what he wants and admits he is not a “word person.” (I bet that line came from someone in Weiner’s past!) He says the nostalgia in the campaign works for him -- but not kids. “Kids have memories,” Peggy protests. (And, indeed, one of her good-luck talismans for presentations come from one of Don’s few childhood memories: the Violet candy that he once told Bobby that his -- Don's -- daddy liked.)

Things fall apart: the undoing of the campaign is the undoing of Peggy. She defends her work the way Don would -- after all, he once even told a client that if he didn’t like it he could leave. After a colleague tells Peggy she’s being “oversensitive,” the client puts her down with, “Can you believe this girl?”

She is indeed in an impossible place: Abe complains, “I’m your boyfriend, not your focus group!” Meanwhile, at the office she gets diminished for her strong convictions and called “a little girl.” 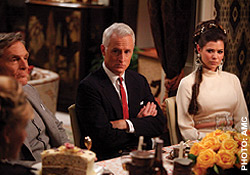 Still, now she’s decided to grow, a, um backbone, just like her errant boss, and uses it to go into full Don Draper bender mode: smoking, drinking, and disappearing into a matinee in the middle of the day -- where for good measure, she smokes pot and gives a random hand job to a stranger.

The movie is “Born Free” which came out in 1966, and tellingly includes a voiceover about “releasing the cub into the wild.” (Peggy later falls asleep on Don’s couch, which was often his end move as well.)  But while still at the movie, a very stoned Peggy yells at the screen, “She’s not gonna make it out there on her own!”  (This was pre-Mary Tyler Moore tossing her beret in Minneapolis.)

So it’s interesting when Jane, in a fab outfit (part Salome, part “I Dream of Jeannie”)  mirrors Peggy’s act, asking Roger, “What do you want to do? Open your vest and yell at the TV for the next 20 years?” They’re at a radical-chic uptown dinner party with pretentious Timothy Leary disciples discussing “tracing logic down to the truth.” To go along and be a good husband, Roger swallows a tab of acid, which allows him to experience a singing vodka bottle and a life-changing epiphany: that he should end his marriage. 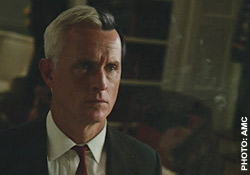 ound Jane’s acting and lines stilted and painful, but Roger was delightful, especially in answering the morning-after question of  “Where are you going?” with “Out the door and into the elevator, I suppose.”

Is he going to dye his hair black now that he’s been released back into the wild?

Talk about reversals and symmetry: last week, Don and Megan were the picture of a functional, contented couple. He took her suggestion to wear the goofy sports coat to the dinner party, where they happily shared a private joke about not remembering Cynthia’s name.

I’m not sure just why Don likes Ho Jo’s so much. But the prospect of going did seem to send him into a child-like frenzy, taking Megan, in her orange-sherbet-colored dress, on a different kind of trip. Maybe he loves Howard Johnson’s because, as Megan put it,  “it’s not a destination. It’s on the way to some place,” and he only likes beginnings. Or perhaps he has a thing for the color combo of turquoise and orange.

My family actually went there for an “ All you can eat” clam night once. And even though I was very young, I thought it was gross. 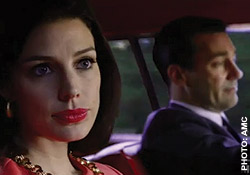 The breakdown between Megan and Don begins in the car. But when the couple gets there, there’s some fun with Dale Van Der Woot rolling out the “orange carpet.”  Megan, who looks like she really could use a sandwich or two, agrees to “a sampling of everything. I like everything.” She and Don sit in a booth, and the scene, in which he orders orange sherbet for her, even though she wanted pie, turns into a parallel experience to the one with the kids and Don in a boot at Disney Land, when Bobby spilled his milkshake.

Megan handled it so serenely at the time that it’s one reason Don wanted to marry her. This time, Don acts like a brutal parent and says she’s embarrassing him. The fight escalates, and he angrily complains about how much she speaks to her mother in French. (That’s a classic sign of an abuser, btw: jealous, paranoid, controlling, wanting to distance her from her family.)

Which gets her enraged, so she says the one thing you don’t say to Don, the whore-child: “Why don’t you call your mother? So he punishes her by getting into the Caddy, gunning the accelerator, and abandoning her in the parking lot. 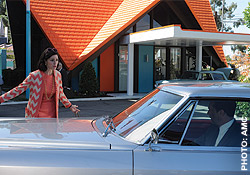 In the midst of the turmoil of his looking for her later, he calls the French mom-in-law, and makes up a story, questioning whether Megan has an allergic reaction to metal. Was it silver or gold? (Like a wedding ring, perhaps? Au revoir marriage?) “Don’t tell her I called,” he says, like a prime manipulator.

And Dale Van Der Woort’s line just then in the middle of the all the tension -- “We closed the pool. Some kid had an accident” -- was pretty funny. (Shit happens.)

By the time Don gets home, the next morning, he’s literally the wolf at the door. “Open the damn door, or I’m gonna kick it in,” he says, which he then does. “You’re a pig,” Megan says. “You left me there.” They then begin a violent chase through the apartment for which the choreography and camera work were staggering.

“I thought you were dead!” he says, after they both fall on the floor, hurt. We see them from overhead, lying on the floor, the same shot that captured Jane and Roger. Except the newlyweds Don and Megan are crying and miserable -- while the newly separated Jane and Roger are transcendent and ecstatic. (There was a similar scene shot from overhead, of Joan, her baby, and her mother in bed earlier this season.) 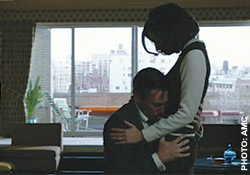 An abashed Don clings to Megan’s mini jumper, begging for forgiveness. “ I thought I lost you.” Here’s another sign of abusers: “Feel sorry for me. I feel so much for you I had to hurt you. Don’t you see, that’s love.” Megan is smart, and she knows it’s not.

Later, Don gets caught up short at the office, when the defrocked and officeless Bert Cooper confronts him. “It’s amazing things are going well with how little you are doing,” he says. And about this, he’s right.

The final scene, of Don looking out of the conference room windows through a vertical grid, suggests the falling-man weekly opening of the show. Tibetan Book of the Damned, anyone?

mad men, tv
14 comments about "Episode 506: I Dream of Janie -- Or, It's Not Over Till The Vodka Bottle Sings ".
Check to receive email when comments are posted.
Read more comments >
Next story loading