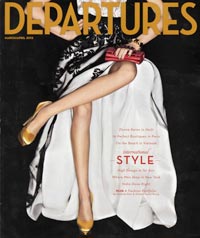 While the consumer magazine business in general may be struggling, some titles stand out from the crowd with big increases in ad pages and revenue. American Express Publishing’s Departures is a member of that happy club, with ad pages increasing 5% and ad revenues up 20% in the first half of 2012 compared to last year, according to Vice President and Publisher Steven DeLuca.

These positive first-half results follow a strong 2011, when ad revenue increased 45% over 2010.

So far this year, Departures (which is distributed to Amex Platinum Card and Centurion members) can boast growth in a number of endemic categories, like fashion and retail, jewelry and watches, and travel. New advertisers in the first half of 2012 include Burberry, Dolce & Gabbana, Japan National Tourism, Jeep, Lincoln, Mandarin Oriental, Michael Kors, Net-A-Porter, Orient-Express, Paul Gauguin Cruises, Sea Island Resorts, Thomas Pink and Waldorf-Astoria.

Departures is also reporting strong growth on the digital front, with ad revenue at Departures.com up 300% in the first quarter of 2012. The magazine is preparing to launch a new app for the iPad, “Departures to Go,” in June.

As noted, Departures is one of few exceptions to an otherwise dreary rule, as the consumer magazine business overall continues to face declines in ad pages and revenue. According to the Publishers Information Bureau, total ad pages declined 8.2% from 36,863 in the first quarter of 2011 to 33,828 in the first quarter of 2012, while rate card revenue slipped 4.3% from about $4.69 billion to about $4.49 billion.

Ad pages are often viewed as a better indicator of the medium’s vitality, as many publishers privately give discounts off rate cards.