Will Vending Machines Be Your Phone's Next Tandem Screen? 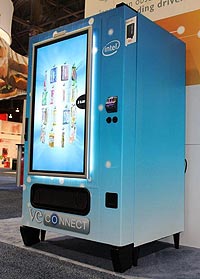 Mobile interactivity with other larger screens almost certainly will not be confined to the familiar living room “second screen” scenarios. The potential for using phones to link with, activate, or play off of out-of-home signage of all sorts is phenomenal.

QR codes at bus and train stops are the most rudimentary form. A number of companies going way back have played with various Bluetooth models that activated movie posters and such. But one of the most promising screen-to-screen connections may be the simple vending machine.

We have all heard the stories of people m-paying for their Cokes at vending machines with a shortcode. In the scenario woven by Vendors Exchange International, makers of “smart vending machines” with touchscreen faces, the next step is turning the machine into an interactive touchscreen that can scan a code off of your phone and trigger a game. Win a game and get an instant discount -- or even a free drink.

The tech these guys are hawking appears to turn digital signage not only into an interactive screen, but one that can be connected to the phone and produce a purchase. The VE Connect unit has a 46-inch to 55-inch 1080p display with touch capabilities. Obviously, the display can show any multimedia material, but it can also be engaged to play games that give instant prizes, like a free Coke. It also comes embedded with Intel Audience Impression Suite, which uses facial detection technologies to determine age and gender of the buyer and even adjust content on the screen accordingly.

According to new Frost & Sullivan research, smart vending machines will see a compound annual rate of growth of 49%. A key driver of this technology above and beyond the use of LCDs is cashless payments. Frost & Sullivan says that once NFC becomes a reality, we will see beverage manufacturers become really interested in the ways that frictionless payments like this also help boost average sales per transaction.