Smartphone Owners Are Ready for M-Coupons - Are You? 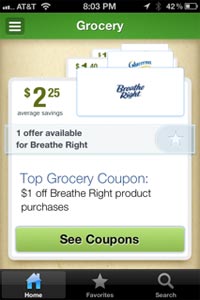 According to a Harris Interactive survey of over 3300 U.S. adults, 40% of smartphone owners have redeemed a coupon on their mobile device. The study was done on behalf of digital couponing service and mobile app CouponCabin in late March of this year.

Of course, the survey did not ask how many of those 40% got quizzical looks from store clerks when presented with a mobile coupon. That may be because the most popular category of mobilized coupon use, daily deals (41% of redemptions), conceivably can take place on the same device on which they are delivered. Okay -- I don’t mean to be churlish about the mobile coupon supply chain. Harris finds that 39% of redemptions from smartphones involved grocery store coupons and 34% involved online coupon codes. Less than a third of redemptions (29%) were printable coupons and less than a quarter (24%) were free samples or trials.

The study says that 29% of smartphone owners search for mobile coupons at least once a month, and 72% of advanced phone owners say they would be at least somewhat likely to use a mobile app that offered different kinds of coupons.

CouponCabin has been an online couponing destination since 2003. This research with Harris supports and promotes the company’s own new iOS/Android app. The app aggregates coupons from a wide range of retailers. The app was able to use my location to find even local merchants who had deals via coupon distributors. Of course, the user’s mileage varies when it comes to aggregation on mobile devices.

Many of the links bring you to standard Web sites that can choke a mobile browser one way or another. The click-through to a 15% off Staples coupon worked well enough and landed me on a scannable voucher. The coupon for Burger King lost me in a morass of parental sign-ins. In another, the scannable code was virtually unrecognizable in the browser when you finally zoomed enough to see it. But I imagine that coupon hunters are more persistent and tolerant than I.

But such is the state of mobile couponing, I think. The consumer may be willing, but from discovery to fulfillment it is still a pretty patchwork affair of hit-or-miss experiences. I still use mobile coupons with trepidation. I never know if I am going to get that seamless redemption that Starbucks and I believe Walgreens has instituted pretty well at their respective points of sale. Or do I get a red alert at checkout, where three store managers have to be called in and someone inevitably pulls out that phone book-sized binder of notes and memos from the home office to try to figure out what to do with these damned things?

coupons, mobile
1 comment about "Smartphone Owners Are Ready for M-Coupons - Are You? ".
Check to receive email when comments are posted.
Next story loading