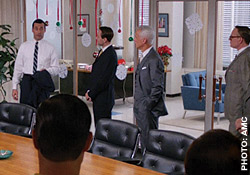 Let’s face it, kids, there’s something about that Aqua Velva Man.  Old Don Draper is back, and he’s in rare form, snapping his fedora and romancing the Joan! How satisfying can an episode get?

Yup, it all feels so familiar: the drinking the afternoon away in a dark midtown bar, the Sinatra music, the electric connection between Don and his inamorata, not to mention the angry wife waiting at home! Be still, my heart!

Best of all, there’s still the possibility of a Don-Joan sexy time ahead, as the bond remains tantalizingly unconsummated! (And how close is Don /Joan to Don Juan?)

I wasn’t thrilled that it’s already Christmas (with only three more episodes to go!) Still, “Christmas Waltz” was a great dance, filled with paper snowflakes on the walls, returning stars and returning themes: Kinsey reappears, having taken up his  creepiest affectation yet; we get a new female grifter, much talk of vomit, and all those Harry (as in Crane) Krishna jokes.

But let’s begin with poor Lane. He’s got middle-of-the-night trouble, in the form of back taxes owed to the Queen. This reminded me of Weiner’s recent use of  “Tomorrow Never Knows,” the most difficult, psychedelic song on the 1966 Beatles’ “Revolver” album. It mystified Don.  But the album also included the much easier-to-understand “Tax Man,” George Harrison’s response to his own shock at what the British government took from his earnings. (“You drive a car, I'll tax the street/If you try to sit, I'll tax your seat/If you get too cold I'll tax the heat,/If you take a walk, I'll tax your feet.”) 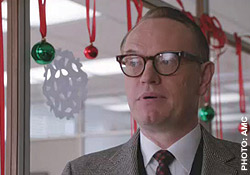 Lane’s crazy actions illustrate the larger themes of  the episode: money, hypocrisy, telling the truth, and doing what’s important for the long term, not the moment. The secret plan he comes up with is deluded, desperate and sad, probably owing to the shame he feels from being beaten as a child.

We see Lane asking Harry Crane for financial projections. Crane mentions that you never know what’s ahead -- that the Russians might invade -- and in the next scene, we see Lane coming out of a meeting with his banker, wearing a Russian-style fur hat, like the spy who came in from the cold. He tries to get the dough the semi-legal way, with his bonus idea. When that’s shot down, he steals into Joan’s office, accountant by day/ thief in the night, and forges Don’s signature on a check: a forgery of a forged identity.

The money might get him through the holidays -- but really, won’t Joan discover the scam when she goes over the books? Will she be able to create some diplomatic way out for Lane? Is he the future falling man?

But let’s get back to Harry (who is having trouble adjusting his rabbit ears in the office, meaning he needs better antennae). Wearing his plaid coat, he goes down to see Kinsey in his new saffron-colored digs in Sitar City. The whole scene accounts for  one of the funniest visual moments in “Mad Men” history; it only gets better as Harry chants and sweats up his glasses. 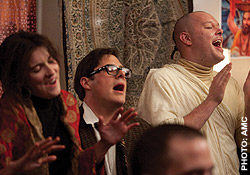 The show is slightly ahead of its time on the whole Hare Krishna movement, which really invaded the American consciousness much later in the ‘60s. But Kinsey was always a bellwether, what with his black girlfriend and  (self-serving) faux-freedom riding.  That would explain his “Negron Complex” spec “Star Trek” script. (Kinsey’s description of his script, “moral complexity tinged with adventure” seems like an in joke by the  MM writers, to describe their own show.)

And by the way, everybody’s in saffron, but Kinsey’s in beige. Does that mean he’s wishy-washy in his devotion?  Not to Lakshmi, certainly. Her name cleverly fits into the whole anti-material-hypocrisy theme of the episode. Lakshmi is the Hindu goddess of wealth, among other things.

The give-and-take between Harry and his old friend Paul is delightful, and palpably sincere, except when it comes to their bizarre lady friend, nee Janet, who reminded me of Don’s desperate artist/heroin-addict ex. As with the sex with Lakshmi on his desk, Harry’s plan for Paul is ass-backwards. Both the L word herself and Peggy told Harry to tell Paul the truth about his script -- that honesty would be the kindest thing to give him.  Instead, Harry cooks up a story about Paul’s golden future, bribing him with $500 to leave immediately for L.A.  I got an instant vision of Paul in full Krishna regalia, singing and dancing, never getting past the airport.

And by the way, someone on the show really has it in for McCann-Erickson. We got a whopper of a joke: Paul admits  that he really “degraded” himself with his previous life, and Harry responds, “at McCann?”  Peggy’s riff, naming Paul’s whole downward spiral of agencies, “Y&R, K&E, B&B,’’ ending with the A& P, was terrific. 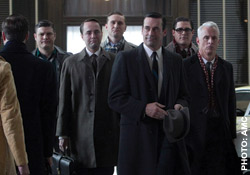 Unfortunately, we didn’t see much of Peg this time, but her reaction scenes during the bonus announcement speeches were priceless. Lane goes on and on, to no reaction from the crowd at all, until Roger steps in and says, “That means you’re all getting bonuses and we’re not” to thunderous applause.

Ditto Pete’s talk about pitching Jaguar. Crickets. Then Don takes the floor, and leads the troops into battle via a motivational speech straight out of Shakespeare’s Henry V, (“we few, we band of brothers….”) Yup, he’s back in the saddle as  the agency’s creator-in-chief, as inspiring as he was during the “Carousel” presentation, although this speech makes a lot less sense (“drowning in Champagne”?)

More important than the actual words, however, Don knows exactly the right moment to remove his jacket and roll up his sleeves as he speaks, a signal of the hard work they’ll all have to do over the holidays and the next six successive weekends.

But the Jaguar story line was begun by Pete -- and as with other Pete ventures, I get a sinking feeling. Is SDCP really among the “small, elite group” asked to pitch?

Still, the whole development allows for that wonderful scene with Don and Joan going to the showroom for a test drive, as a test couple. Unlike the awkward scene with Peggy in the test kitchen, Don and Joan together have “four children” and are the bomb. (Why would they make the Jaguar salesman a mismatched American dweeb, while, in a previous episode, the guy selling Don the Cadillac was a Brit in a bespoke suit?) 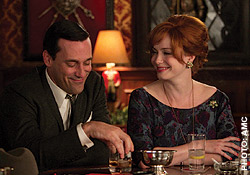 The lines the fake couple exchange seem kind of stagey -- “No room for three?” and “She really wants me to take her for a ride” -- because another point of the show is that everything is a performance. Joan likes the sexy red car (duh), but at first Don says it “does nothing for him.”  “You’re happy, you don’t need it,” Joan says.

As they talk about divorce, and get closer and closer, Don admits that he was “scared shit” of Joan in the beginning, and that from the amount of flowers she received at reception, he thought she was dating the “Ali Khan.”

The layers get genius here. A little research turns up that the notorious playboy was quoted talking about his first marriage to one Joan Guinness. “I was tired of trouble,” he said. “Joan was a sane and solid girl, and I thought if I married her, I would stay out of trouble.”

This did not happen, of course: both Khan and that other Joan were married several more times, including Khan’s marriage to actress Rita Hayworth. But Don’s note to Joan, delivered with red roses the next day, (“Your mother did a good job,” signed Ali Khan) proved as romantic and devastatingly clever as his missive to “Lovely Megan” was earlier.

Still, I found Joan’s line, “My mother raised me to be admired,” sad. It sounded like Blanche DuBois’ "I have always relied on the kindness of strangers.” Especially now that we know Joan’s mother.

At first, I thought Joan’s rejection of Roger’s offer to support the baby was noble but deluded.  Really, what happens if the agency goes down?  Then I realized that in light of Greg serving her with divorce papers, it’s probably better not to have a paper trail, so that Greg can’t actually take the “moral high ground,” in those pre-DNA testing days, even if he suspects that Kevin isn’t his. It would be short-term thinking, like Lane’s mistake. 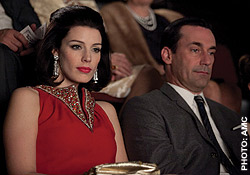 Leaving the bar, Don really took to that stick shift, balling that jack (the language is straight out of “On the Road,”) straight to the Jaguar showroom. He gets home to an angry, spaghetti-throwing Megan. And he thinks (hopes) it’s her prelude to sex. “Thit down,” she says, demonstrating a similarity to Sally. (But Sally’s lisp is all gone; she’s a big girl!) Megan’s actually acting more like Betty. (Both have reason to be angry and resentful with Don, of course.)

Earlier, at an avant-garde theater group performance that Don found tiresome, an actor spoke of wanting to vomit at the commercials, and having “nothing to hold on to.”  When Don and Megan got home, the two of them were physically disconnected in the living room -- neither had anything to hold on to. Megan defended the play as having more to do with “the emptiness of consumerism.” As she said it, she was wearing a jeweled mini dress, standing in their consumer paradise of an apartment.

Don doesn’t know “what he’s wanting.” He wants to hold on to Megan, but not if it means an empty living room and getting his work demeaned by her friends. She seems to have even less reason to stay.

At the bar, Don mentions that he suspects “the agency misses” Megan -- when in fact he does.  Meanwhile, Joan mentions her understanding of what goes wrong with marriage as “the sin of being familiar.” She was wrong about Megan before. Will she stay smart?

Let’s hope the agency does “swim the English Channel and drown in Champagne.” I sure hope the dampness doesn’t flood the electrical system.