Paywalls Proliferate, Most DIgital Pros Won't Pay For Them 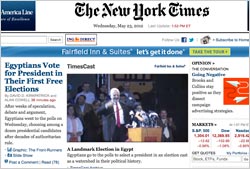 While the figures may not be indicative of broader consumer behaviors, over half of digital media professionals who encounter online paywalls say they immediately leave the Web site, according to a DigiCareers survey cited by eMarketer. However, there was some good news for online publishers, as a substantial number said they looked into the details of access and pricing.

Overall, 52% of digital media professionals surveyed by DigiCareers said they immediately leave a site after encountering a paywall, while 22% said they delete their cookies or try to find some other way to get the content for free. Nine percent said they ask to borrow a username and password from a friend or colleague; these figures probably overlap.

However, 42% said they actually explore the paywall pricing and at least consider a purchase decision. Furthermore, just 25% of the digital media pros said they developed a negative brand perception about a media company as a result of encountering an online paywall.

In terms of expectations, 90% of digital media pros said they expect to get access to at least some free content before being asked to pony up. Even more significant for publishers and advertisers, 63% said they expect no ads once they have paid for access -- although 61% said they would accept ads inside the paywall if it keeps prices down.

Less than half -- 42% -- agreed that paywalls are essential for publishers to provide high content and services -- perhaps the same cohort which was at least willing to consider paying for access).

The bad news for news publishers: digital media pros were far more willing to pay for entertainment content than for news: 47% paid for movies, 36% for digital magazines, and 35% for music, compared to just 13% for news and newspapers.

The news comes as more U.S. newspapers establish -- or consider establishing -- online paywalls for their content. On Wednesday an internal memo from McClatchy Co., which publishes The Miami Herald among other papers, revealed that company’s plans to implement paywalls at most of its newspapers using the Press+ system. The list of other major newspapers that have adopted or are in the process of adopting paywalls to date includes The Wall Street Journal, New York Times, Boston Globe, Chicago Tribune, Los Angeles Times, Washington Post, and Baltimore Sun, along with around 80 community newspapers owned by Gannett Co.