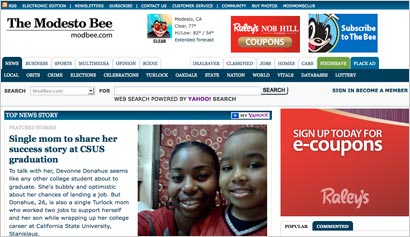 In the memo to employees, McClatchy Vice President for News Anders Gyllenhaal wrote that “after more than a year of experiments and analysis on pay models, McClatchy newspapers will begin a robust test of a pay plan that looks like the right balance for our Web sites.”

While acknowledging that online paywalls risk driving away some light users, Gyllenhaal said early experiments confirmed that many heavy users are willing to pay for access -- including multimedia subscriptions covering print, Web, smartphones and e-editions.

Like most other publishers, McClatchy will give online readers free access to a limited number of articles before asking them to pay for further access, although there is no word yet on what that number will be. The first batch of five newspapers will introduce their online paywalls about two months from now, using the online payment system created by Press+, which has already been tested at The Modesto Bee.